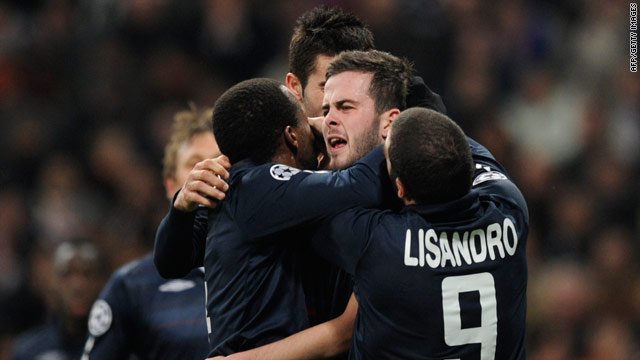 (CNN) -- Big-spending Real Madrid have crashed out of the Champions League after being held to a 1-1 home draw by Lyon.

The result, following their 1-0 defeat in France last month, ensures Madrid bow out of the competition at the last 16 stage for the sixth season in a row -- and also means they miss out on their dream of appearing in the final at their Bernabeu home.

The evening started well for Madrid and they took the lead in just the sixth minute with Cristiano Ronaldo's seventh Champions League goal of the season.

The world's most expensive player fired through the legs of visiting goalkeeper Hugo Lloris after running onto Guti's long ball over the top of the Lyon defence.

Madrid then missed a golden chance to double their lead in the 25th minute when last season's top scorer Gonzalo Higuain somehow managed to hit the post, when left with an open goal after Lloris had raced out to try and get the ball.

Madrid continued to waste chances to increase their advantage and they were made to pay when Lyon came out a different side in the second half.

"We are all angry and this is really difficult to take," Casillas told reporters after the match. "I ask for forgiveness from the fans for this defeat in a competition where we had the highest hopes."

After spending over 250 million euros in the summer, this defeat will increase the pressure on coach Manuel Pellegrini, who could well be out of a job if real fail to win the Spanish Primera Liga title.