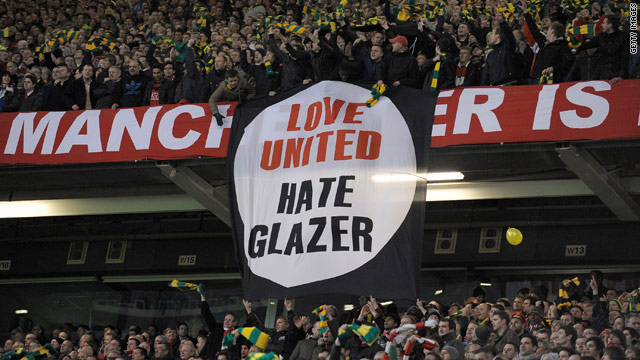 London, England (CNN) -- The group poised to launch a takeover bid for English Premier League side Manchester United has signaled its intent by appointing a major international bank to act as its financial adviser.

The "Red Knights" consortium, made up of wealthy businessmen, has employed Japanese investment bank Nomura to help with its $1 billion move for the club, currently owned by the American Glazer family.

The Knights say Nomura will now work closely with the Manchester United Supporters' Trust (MUST) and other potential investors to "coordinate and formulate the proposal to be put to the Glazer family," according to a statement.

The bank's team will be led by Guy Dawson and Andrew McNaught, both of whom advised Manchester United's board when the club was sold to the Glazers in 2005.

Their first job will be to firm up offers of financial support pledged to the Red Knights' cause, and help on any proposal that is eventually put to the club.

The Glazers have been criticized for the levels of debt at the current English champions, with the latest accounts showing that United are more than $1 billion in the red. The owners recently launched a bond issue to raise $750 million to reduce the debt. They also own NFL side Tampa Bay Buccaneers.

The Red Knights' announcement comes just hours after the most vocal protest yet from Manchester United supporters against the Glazer family, during Wednesday's European Champions League last 16 victory over AC Milan.

Fans unveiled banners that read: "Love United Hate Glazer." The green and gold scarves that have become a symbol of their disquiet were also prevalent at Old Trafford.

The club's chief executive, David Gill, told a football conference last week that the Glazers were not interested in selling the club. Nevertheless the Red Knights are pressing ahead.

In a statement confirming the appointment of Nomura, the group said: "The Red Knights are pleased to confirm that Nomura, the global investment bank, has agreed to advise on a possible acquisition of Manchester United.

"Nomura will work closely with the Red Knights, MUST and other potential investors to co-ordinate and formulate the proposal to be put to the Glazer family.

"Nomura is beginning its role by contacting the many expressions of financial support the Red Knights have received to date."