Real give vote of confidence to Pellegrini 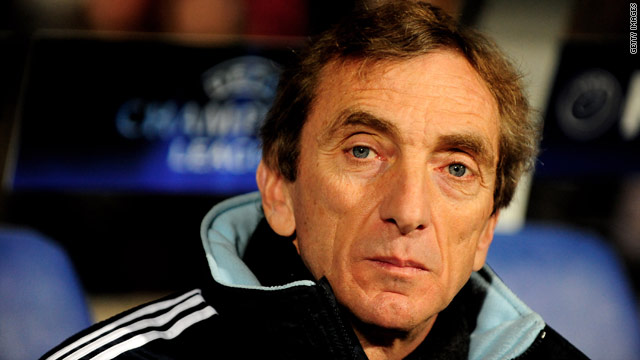 Pellegrini was a helpless spectator as his team crashed out of the Champions League to Lyon.
STORY HIGHLIGHTS
RELATED TOPICS

(CNN) -- Beleaguered Real Madrid coach Manuel Pellegrini has received a vote of confidence for the club's director-general Jorge Valdano despite their disastrous Champions League exit to Lyon on Wednesday night.

The nine-time European champions were held to a 1-1 home draw in the Bernabeu to go out 2-1 on aggregate to the French side, who won the first leg 1-0.

It is the sixth year in a row that Real have failed to get beyond the last 16 knockout stages of a tournament they once made their own and to add to the disappointment, this year's final will be held in their home stadium in Madrid.

Angry fans reacted by waving white handkerchiefs and the Chilean's hold on the top job looks insecure, but Valdano was quick to back him.

"We will respect him because we believe in his work, although we know that the coach of Madrid is always accompanied by controversy," Valdano told gathered reporters.

"He has a contract for next season and the plan is that he will continue being our coach. "The season hasn't finished and there are still things to fight for."

Real currently top Spain's La Liga ahead of arch-rivals Barcelona, but their exit from the Champions League mirrors a humiliating defeat to third-flight Alcorcon in the Copa del Rey earlier this season, with Pellegrini again placed in the spotlight.

He said his team were devastated by the aggregate defeat to Lyon but would now concentrate on wresting the league title from defending champions Barcelona.

"We played well in the first half but missed two clear scoring chances," he said .

"The team was worried about hanging onto the 1-0 in the second half until Lyon scored. We all dreamed about playing the final in the Bernabeu. The team is devastated."

"I take full responsibility. This is a huge setback, but we have to get out of this rut and continue fighting for La Liga."

Florentino Perez was re-elected as president last summer and his return signaled a massive spending spree, highlighted by the acquisition of world record signing Ronaldo and Brazilian Kaka.

In total, Real spent a reported $340,000 on new players ahead of the current season, but their only hopes of silverware now hang on La Liga success.

Pellegrini is the ninth coach installed at the Bernabeu since current Spanish national coach Vicente del Bosque left the club in 2003.

Valdano insisted that despite the setback, Real would eventually achieve their goals.

"This project (under Perez) has only just started and this was a sad night because we had placed a lot of hope in this competition," he said.

"We need to be more united than ever, to encourage the players and show our personality, to get over this situation and face the criticism that will come."

Real travel to Valladolid on Sunday hoping to return to winning ways in La Liga.