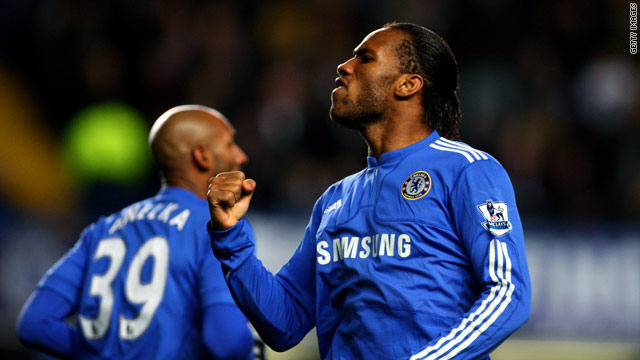 (CNN) -- Chelsea's Didier Drogba has been crowned African Footballer of the Year for the second time.

The Ivory Coast striker, who also claimed the honor in 2006, fought off tough opposition from Inter Milan's Cameroon ace Samuel Eto;o and his club teammate Michael Essien, who plays for Ghana.

The result was announced at a ceremony in Accra, Ghana, with Drogba succeeding Manchester City's Togo star Emmanuel Adebayor.

The award was judged by national coaches from countries affiliated to the Confederations of African Football (CAF).

Drogba, who was not at the ceremony as he prepares for English Premier League action with Chelsea this weekend, will receive $20,000.

The 32-year-old played a leading role as the Elephants qualified for this summer's World Cup finals, but the Ivory Coast disappointed in the recent Africa Cup of Nations where they were knocked out in the quarterfinals.

But Drogba's form this season for Chelsea in their bid to win the treble of Premier League, FA Cup and Champions League has been outstanding with 25 goals in all competitions.

Africa Cup of Nations runners-up Ghana were the other big winners on the night with striker Dominic Adiyiah claiming the Young Player of the Year award.

Sellas Tetteh was named Coach of the Year having led the Black Stars to success in the under-20 World Cup.

Africa Champions League winners TP Mazembe from the Democratic Republic of Congo were named Africa Club of the year.

The Best Player on the Continent also went to their captain Tresor Mputu Mabi.