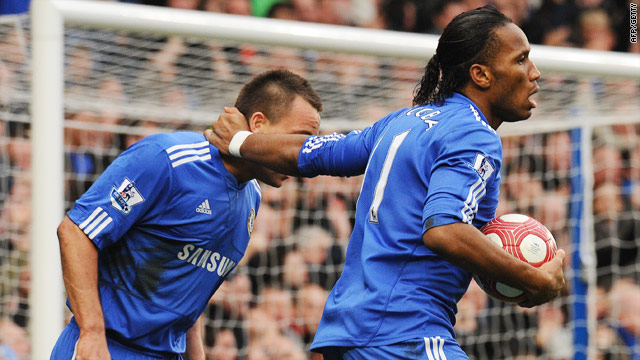 (CNN) -- Goal machine Didier Drogba scored twice as Chelsea returned to the top of the English Premier League with a comfortable 4-1 win over relegation battlers West Ham at Stamford Bridge on Saturday.

The valuable victory leaves them ahead of Arsenal, 2-1 winners at Hull in the late game, on goal difference, having played a game less.

Two-time champions Manchester United, who are a point behind in third spot, can return to the top spot with a draw or win over Fulham at Old Trafford on Sunday, but will have played a game more than Chelsea.

The Gunners took the lead through Andrey Arshavin after 14 minutes but Jimmy Bullard leveled with a penalty after 28 minutes when Sol Campbell fouled Jan Vennegoor of Hesselink.

Hull were down to 10 men after the 45th-minute dismissal of George Boateng but bravely held out until Arsenal's cruel late winner.

"It's maybe not good for my heart, but for the championship it's not bad," Arsenal manager Arsene Wenger told gathered reporters.

In Saturday's early kickoff, their north London rivals Tottenham Hotspur stepped up their bid for the final Champions League place with a 3-1 win over mid-table Blackburn.

Jermain Defoe put Spurs ahead in the first half and a brace from in-form Roman Pavlyuchenko, sandwiched by a reply from Christopher Samba, gave the home side three points.

It leaves them three points clear in fourth spot of Manchester City, who have two games in hand and travel to Sunderland on Sunday.

Chelsea have come under increased pressure from Manchester United and Arsenal since the turn of the year and knew that three points were a necessity against their London neighbors.

West Ham gave themselves hope as a superb strike from former player Scott Parker canceled out an early header by Alex for Chelsea.

But in the second half a double from new African Player of the year Drogba, either side of a Florent Malouda strike, took him to 27 for the season and left West Ham well-beaten.

Chelsea will be hoping he keeps his scoring touch for their midweek Champions League home game against Inter Milan, who lead 2-1 from the first leg of the last 16 tie and are managed by their old boss Jose Mourinho.

The game is in the balance. We want to win but so do Inter
--Carlo Ancelotti on Champions League tie
RELATED TOPICS

Inter suffered a shock league defeat to Catania in Italy on Friday night but Ancelotti believes it will have little bearing on the match.

"The game is in the balance. We want to win but so do Inter," he told Sky Sports.

"We have to do our best to win and in this moment we are in good condition to do our best. I have not seen Inter's game yet, I will watch it on Sunday."

Elsewhere, Aston Villa's bid for fourth spot was hardly helped by a drab goalless draw at Stoke and they are six points behind Tottenham, but do have two games in hand.

Everton looked set for another victory as Victor Anichebe and Ayegbeni Yakubu gave them a two-goal lead inside 22 minutes at Birmingham, who also have European pretensions.

Birmingham hit back after the break as Cameron Jerome and Craig Gardner scored to force a 2-2 draw.

Bolton continued their charge away from the relegation zone with a convincing 4-0 home win over fellow strugglers Wigan.

Wolves also stayed clear of the drop zone with a 2-1 win over Burnley, who remain in the bottom three, at Turf Moor.