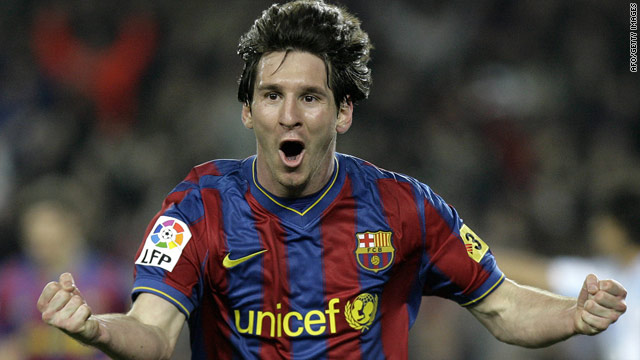 Lionel Messi was in sensational form on Sunday, scoring a hat-trick in Barcelona's 3-0 victory over Valencia.
STORY HIGHLIGHTS
RELATED TOPICS

After a goalless opening 45 minutes at the Nou Camp, the introduction of substitute Thierry Henry turned the game, with the Frenchman's pace and guile causing chaos in the Valencia defence, allowing Messi to take full advantage with three superb goals.

The opener came in the 56th minute when the 22-year-old Argentine somehow weaved his way past three defenders before slotting home from a tight angle.

Valencia then missed a golden opportunity to level when giant striker Nikola Zigic was foiled by goalkeeper Victor Valdes after being put clean through.

Then, just a minute later, the visitors had Hedwiges Maduro sent off for two bookable offences on Messi -- leaving gaps at the back that Barcelona exploited.

Valencia remain third despite the defeat, but they are now a massive 18 points off the lead, leaving the title race very much a two-team affair.

Despite the victory, Barcelona remain behind bitter rivals Real Madrid on goal difference after Manuel Pellegrino's side recovered well from their Champions League exit to Lyon in midweek by thrashing Valladolid.

Striker Gonzalo Higuain emulated the feat of fellow-Argentine Messi with a hat-trick, with Cristiano Ronaldo netting the opener courtesy of a trademark free-kick, as Real remain top by virtue of having a two-goal better goal difference.

Elsewhere, Villarreal improved their chances of reaching the Europa League with a 2-0 home win over Xerez -- avenging their 2-1 defeat to the bottom side last October.