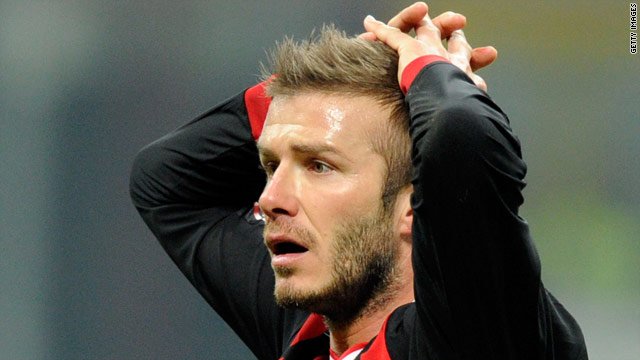 (CNN) -- David Beckham suffered an Achilles tendon injury before Clarence Seedorf scored in the final minute to give AC Milan a 1-0 win over Chievo on Sunday, a result that moved them to within a point of leaders Inter at the top of Serie A.

Veteran England midfielder Beckham hobbled off the pitch in tears, reaching down to nurse his left heel, with TV network Sky Sports Italia reporting that he had suffered a suspected ruptured Achilles tendon injury.

If that proves to be the prognosis, it would leave Beckham's hopes of appearing for England at this summer's World Cup finals in tatters.

One sports physician has said Beckham has no chance of playing in the World Cup in South Africa, according to the Press Association.

"It's remotely possible he may be running in three months," said Dr Tom Crisp. "The chances of him being fit to play for England are non-existent."

Beckham's injury soured Milan's eventual win, achieved with just 10 men as all three substitutes had already been deployed before the former Manchester United midfielder was forced to limp off.

One of those substitutes, Seedorf, was to score the only goal of the game, firing home a superb long-distance strike.

"This was an important victory, but this injury prevents us from really enjoying it. It's an important injury and we need to be able to judge how serious it is," Milan coach Leonardo told Sky Sports Italia.

This was an important victory, but this injury prevents us from really enjoying it.
--Leonardo

The win means Milan move to within a single point of leaders and city rivals Inter at the top of the table.

Elsewhere, Juventus managed to waste a three-goal advantage, with all their goals coming in the opening 10 minutes, to draw 3-3 at home to Siena.

Roma remain in third position, six points behind Inter, after they were also held to a 3-3 draw, this time at struggling Livorno -- for whom Cristiano Lucarelli scored a hat-trick.

A dramatic weekend in Serie A began on Friday night when leaders Inter had Sulley Muntari sent off in a shock 3-1 defeat at Catania.