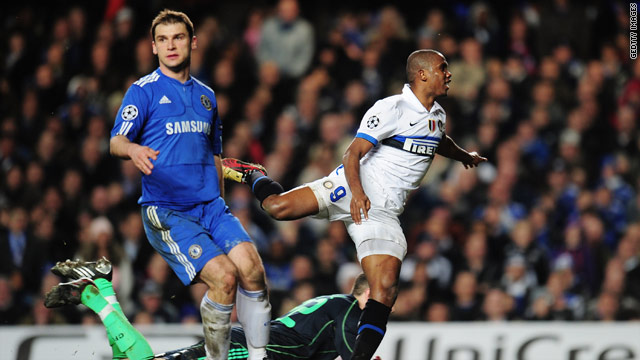 Eto'o wheels away in triumph after scoring the only goal of the game at Stamford Bridge.
STORY HIGHLIGHTS

(CNN) -- A clinical second half strike from Samuel Eto'o sealed a famous Champions League victory for Inter Milan over Chelsea to cap a triumphant return to Stamford Bridge for their coach Jose Mourinho.

The Cameroon striker seized on a fine through pass from Wesley Sneijder to score the only goal of the second leg in the 78th minute to give the Italian champions a 3-1 aggregate victory.

It was no more than Mourinho and his men deserved after having several excellent chances to put the tie beyond Chelsea's reach.

Inter led the last 16 clash 2-1 from the first leg in the San Siro, but many were expecting English Premier League title challengers Chelsea to overturn the deficit.

When we did score, Chelsea were completely out of the game. I thought everything was superior, not just our tactics but our attitude on the pitch
--Jose Mourinho
RELATED TOPICS

But they reckoned without the tactical wiles of their former manager Mourinho and Carlo Ancelotti's men scarcely created a chance throughout the 90 minutes as the prolific Didier Drogba and strike partner Nicolas Anelka were blunted.

To cap a dismal evening for Ivorian international Drogba, he was sent off five minutes from the end for a stamping incident on Thiago Motta in the Inter penalty area.

Former Barcelona star Eto'o had begun his evening by wasting an opportunity to put his side further ahead in the opening skirmishes as a John Terry mistake left him to head tamely at Ross Turnbull from close range.

A feature of the first half was a number of last-ditch blocks by Inter defenders, the first by Maicon as Drogba was left with a clear sight of goal.

Walter Samuel also denied Florent Malouda and Chelsea appealed in vain for a penalty when Motta tangled with Branislav Ivanovic after a corner.

Chelsea ended the half besieging the Inter goal and their prospects looked bright for the second half, but it was Inter who proved the more dangerous on the break.

Sneijder exploited gaps on the Chelsea defense and from his pass the best chance fell to Argentine Diego Milito but he scuffed his shot wide of Turnbull and the goal.

Motta also headed wide from close range, but when Eto'o was given the same opportunity he showed his quality and might have added another but for a fine save by Turnbull after Drogba had left Chelsea with 10 men.

Mourinho said his team had given the "perfect performance" but was growing concerned after they had wasted several excellent chances.

"When we did score, Chelsea were completely out of the game. I thought everything was superior, not just our tactics but our attitude on the pitch," the Portuguese coach told Sky Sports.