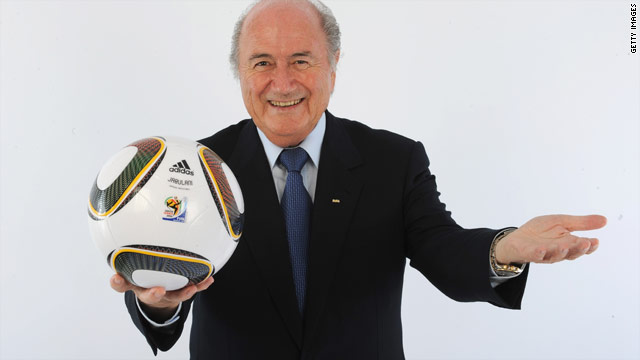 Sepp Blatter has been the president of football's world governing body FIFA since 1998.
STORY HIGHLIGHTS

Editor's notes: The interview with Sepp Blatter will take place on 29 March and will debut on 29 April as part of CNN's hour-long World Cup preview program.

(CNN) -- Why is goal line technology not used by football? Is Africa's hosting of the 2010 World Cup a step in the right direction? Are the world's best players being asked to compete in too many global competitions? These are just some of the issues that may be puzzling you about the beautiful game.

Well worry no more because here is your chance to quiz the man in charge of global soccer, Sepp Blatter, the head of world football's governing body FIFA.

CNN will speak to Blatter in an exclusive interview at FIFA's headquarters in Zurich, Switzerland on Monday 29 March where we will ask him the questions you want answered -- just add your query to the bottom of the page.

Are you a World Cup super fan? Represent your team

Joseph (Sepp) Blatter, a former Swiss amateur footballer, was voted in as the FIFA president in 1998 before securing a second term in office in 2002, and a third in 2007.

His tenure has seen him lead world football through three World Cups -- the fourth will kick off on June 11 in Johannesburg's Soccer City stadium -- five Confederations Cups and the creation of the World Club Cup which has taken place annually since 2005.

Modern technologies can be very costly, and therefore not applicable on a global level
--Sepp Blatter, FIFA chief
RELATED TOPICS

The 74-year-old has been heavily involved with charitable programs during his presidency.

These include UNICEF's "Say Yes for Children" campaign, which aims to increase awareness of children's rights, and the more recent "1Goal" program, that seeks to increase education opportunities in Africa.

Blatter was a key figure in securing Africa's inaugural World Cup for 2010 after he introduced a system which saw each regional confederation take turns in hosting the tournament.

The soccer chief has also courted controversy during his 12 years in charge, most recently by ruling out the introduction of goal line technology into the game.

"The application of modern technologies can be very costly, and therefore not applicable on a global level," Blatter told FIFA's official Web site.

"Many matches, even at the highest level, are not even televised. The rules need to be the same for all association football matches worldwide."

Blatter has views on the English Premier League's domination of the global game. "In France they have an expression 'l'appetit vient mangeant' [the appetite comes with eating]. It means when you are at a good table you like to eat more and more and more. And this is the success story of the Premier League," he told a FIFA meeting held in Northern Ireland in March 2009.

The Swiss administrator has also condemned the hold big clubs have over star players. When Spanish side Real Madrid were negotiating with Manchester United over the transfer of Cristiano Ronaldo, Blatter told British broadcaster Sky News: "I think in football there's too much modern slavery in transferring players or buying players here and there, and putting them somewhere."