Chelsea get back on track at Portsmouth 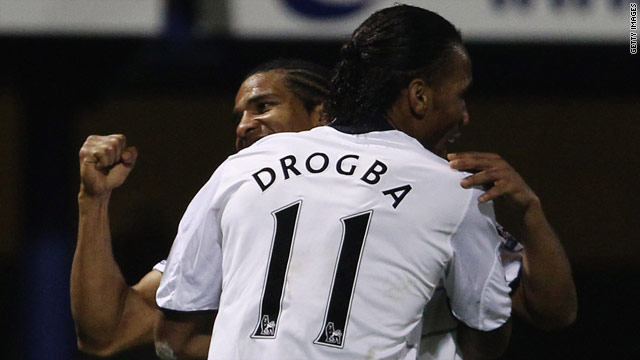 (CNN) -- Chelsea got their charge for the English Premier League title back on track with an emphatic 5-0 win at bottom club Portsmouth.

Didier Drogba and Florent Malouda each scored two and Frank Lampard added another as Chelsea eased the pressure on their Italian coach Carlo Ancelotti.

Drogba's opener on 32 minutes owed much to an error from England goalkeeper David James, who missed his kick when attempting to clear a backpass, allowing Drogba to tap into an empty net.

Frenchman Malouda got his first when he latched onto a pass from Frank Lampard just after halftime, and he grabbed his second ten minutes later after James parried Lampard's shot.

Drogba went clean through to notch the fourth before Lampard sealed the rout with a late header.

Elsewhere, Champions League-chasing Manchester City missed the chance to go fourth after they were beaten at home for the first time this season, by Everton.

Tim Cahill opened the scoring just after the half hour mark when he headed home Leighton Baines' cross. Mikel Arteta made the game safe with five minutes left after good work from substitute Jack Rodwell.

Blackburn edged past Birmingham City 2-1 thanks to a double from midfielder David Dunn. He scored either side of James McFadden's effort.

In the FA Cup, Spurs came from a goal down at halftime against Fulham to win 3-1 and book their place in the semifinals.

Bobby Zamora had given Fulham the lead but goals from David Bentley, Roman Pavlyuchenko and Eidur Gudjohnsen sealed the win.

Tottenham manager Harry Redknapp will now face former club Portsmouth in the last four -- the team he led to an FA Cup win in 2008.