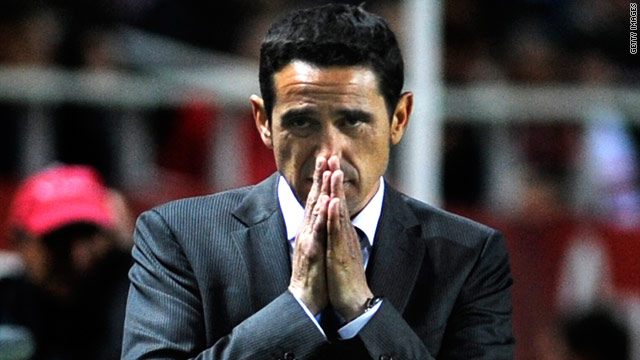 Despite lying fifth in the Spanish Primera Liga table, Sevilla were knocked out of the lucrative European Champions League by Russian side CSKA Moscow last week.

Jimenez had also secured a Copa del Rey final against Atletico Madrid but it wasn't enough to save the 46-year-old's job.

The club's sporting director Ramon Rodriguez admitted the decision had been difficult but said he had "done what I had to."

He told the club's official Web site: "It was an unavoidable situation and we had to find a solution, and the pain that it brings.

"Tuesday was the end of the story but the decision comes from the image and dynamics of the team. Without doubt we are grateful to Manolo. He is an excellent professional, he has made all this possible and impossible. However it is obvious that he could not get a response out of the team.

"Fortunately we believe that there is time. The growth and the ambition of the club is shown in the change of the manager. We are fighting for important things."

Ironically, it is Mallorca who occupy the much-coveted fourth spot in the table that guarantees Champions League football next season.

In that season he led Sevilla to a fifth-place finish, while in 2009 they came third in the league behind Real Madrid and Barcelona.

Rodriguez said a new manager would be in place for Sunday's game with Villarreal. "The matter will be resolved as soon as possible and he [the new manager] will be sitting on the bench for Sundays match," he added.