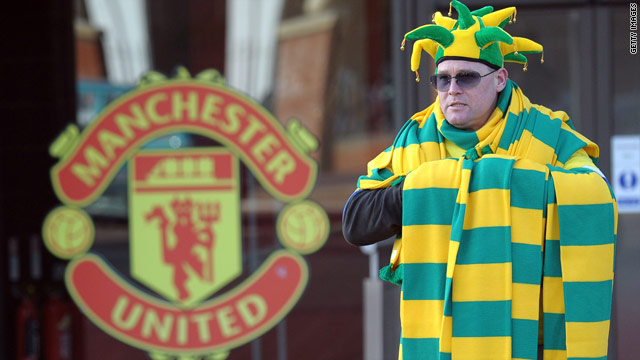 Fans have been wearing green-and-gold scarves to show their opposition to the Glazer ownership.
STORY HIGHLIGHTS
RELATED TOPICS

(CNN) -- The group of wealthy businessmen planning to buy English Premier League champions Manchester United has ruled out making a bid until the end of the season.

The "Red Knights" consortium signaled their intention to buy out the American Glazer family on March 2 and have been recruiting new investors and working on a proposal.

In a press statement, however, they announced that they would not be making an offer until at least June to avoid providing a distraction from the club's pursuit of the Premier League and Champions League trophies

"In the next few weeks we will continue to work on our proposal," the statement said. "We do not expect this to be finalized before the end of the current football season.

"This will have the advantage of minimizing external distractions as the team enters the decisive period of the season."

The battle for Manchester United explained

Earlier this month, the Red Knights hired Japanese investment bank Nomura to help formulate their $1 billion move for the club.

The group has been working closely with Manchester United Supporters' Trust (MUST) to help generate backing from the club's international network of fans.

"We have been speaking to and meeting many potential Red Knights who have contracted us since our interest was made public," the statement added.

"These potential Red Knights have offered ideas and support and with the help of this input, our plans have been developed further."

The Glazers have been criticized for the levels of debt at the current English champions, with the latest accounts showing that United are more than $1 billion in the red. The owners recently launched a bond issue to raise $750 million to reduce the debt. They also own NFL side Tampa Bay Buccaneers.

United fans have shown their support for the bid with protests against the Glazer family at recent matches.

The green and gold scarves that have become a symbol of their disquiet now dominate the stands at Old Trafford, while banners declaring "Love United Hate Glazer" are commonplace.

Former United midfielder David Beckham gave the bid a lift when he donned one of the scarves as he left the field after AC Milan's March 10 Champions League defeat at Old Trafford.