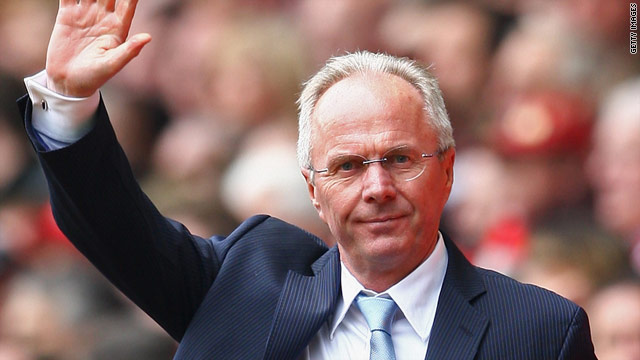 Eriksson has been handed the responsibility of leading Ivory Coast at the World Cup finals in South Africa.
STORY HIGHLIGHTS
RELATED TOPICS

(CNN) -- Former England and Mexico coach Sven-Goran Eriksson has been appointed as coach of the Ivory Coast national team for the World Cup finals in South Africa.

Eriksson led England to the quarterfinals of both the 2002 and 2006 World Cup finals but had a less successful spell with Mexico, and was sacked from that post in April last year.

The Swede was recently director of football at lower league English side Notts County, but left that position when the club ran into financial difficulties.

The appointment of Eriksson was announced live on national television on Sunday evening by Souleymane Alex Bamba, a member of Ivory Coast's Football Federation.

A statement released by the Ivory Coast Football Federation (FIF) later read: "Aware of the great expectations of our population who have taken a keen interest in the matter, the executive committee focused its choice on Mr Sven-Goran Eriksson.

"The Swede has been, among others, coach of England and Mexico. He is an experienced technician who has been proven.

"His mission is to lead our team during this World Cup, and to ensure that there is an honorable participation in a competition reserved for the top 32 football nations in the world, and it obviously will be difficult.

The FIF only confirmed Eriksson's appointment for the World Cup and it is still unclear whether they will be seeking a more permanent coach after the tournament in South Africa has ended.

Ivory Coast have been handed a difficult draw in South Africa and face both Brazil and Portugal in the group stage of the competition.