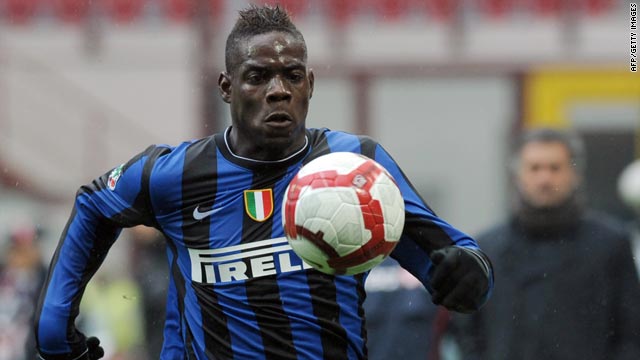 (CNN) -- Young striker Mario Balotelli made a goalscoring return to Inter Milan's line-up as the Italian champions bounced back from last weekend's defeat to maintain a one-point lead in Serie A on Saturday.

The 19-year-old was welcomed back into the squad after apologizing during the week following his falling-out with manager Jose Mourinho, and helped Inter stay ahead of Roma with a 3-1 victory at home to Bologna.

It was a successful end to a mixed week for Mourinho, who had announced his unhappiness with Italian football before Wednesday's 1-0 win over CSKA Moscow in the first leg of the Champions League quarterfinals.

Brazilian midfielder Thiago Motta put Inter ahead in the 29th minute with the first of his two goals, firing in a shot from the edge of the penalty area after controlling the ball on his chest.

Balotelli marked his first outing since March 7 with the second seven minutes after halftime with a cool finish following a pass from strike partner Diego Milito.

Motta sealed a comfortable victory ahead of Tuesday's trip to Russia as he slotted in with five minutes left after a neat exchange with Dejan Stankovic.

Second-placed Roma kept in touch with six matches to play following a 1-0 victory at mid-table Bari, where striker Mirko Vucinic returned from illness to net the winner in the 19th minute.

The Montenegro hitman netted his ninth league goal this season after Francesco Totti combined well with Luca Toni, as Roma survived an earlier scare when defender Nicolas Burdisso had to clear Barreto's close-range effort off the line.

Rodrigo Taddei missed a late chance to double the lead as Claudio Ranieri's team extended their unbeaten Serie A run to 22 matches.

AC Milan remained two points behind Roma in third after winning 3-2 at mid-table Cagliari, with all five goals coming in the first half.

Milan twice led through Marco Borriello and Klaas Jan Huntelaar, but teenage striker Daniele Ragatzu brought the Sardinians level both times before the hosts conceded an unfortunate own-goal in the 38th minute when goalkeeper Federico Marchetti knocked the ball onto teammate Davide Astori and into the net.

Palermo suffered a setback in their bid to qualify for the Champions League after losing 2-0 at Catania, who moved seven points clear of the relegation zone.

Maxi Lopez's first-half double meant that the fourth-placed Sicilians were joined on 51 points by Sampdoria, who won 2-1 at 10-man Chievo.

Former Italy striker Antonio Cassano scored in the first minute and fellow forward Giampaolo Pazzini made it 2-0 in the 55th before the 14th-placed Verona side lost defender Santiago Morero following a second booking in nine minutes.

Andrea Mantovani reduced the deficit on 76 but Sampdoria held on to boost hopes of a European place next season.

Napoli took sixth place after a 1-1 draw at Lazio, who moved three points clear of the bottom three, as Juventus suffered a 3-0 defeat at Udinese in the late match.

Udinese moved four points above the bottom three as Chilean midfielder Alexis Sanchez opened the scoring in the ninth minute, while Simone Pepe (65) and captain Antonio Di Natale (77) wrapped up victory in the second half.

Fiorentina drew 1-1 at Parma to maintain eighth place on goal difference from Genoa, who were held by the same score at home to bottom club Livorno.

Atalanta moved five points clear of Siena with a 2-0 win over the second-bottom side, but still remained in the drop zone.