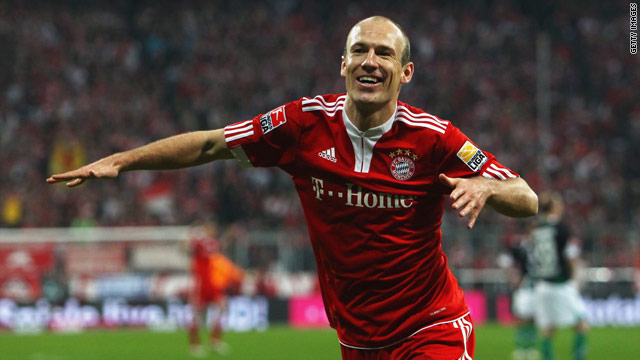 (CNN) -- Another wonder strike from in-form Dutch winger Arjen Robben proved enough to give Bayern Munich a narrow 1-0 Champions League semifinal first leg win over Lyon, in a match which saw both sides reduced to 10 men.

Robben, who scored a hat-trick in Bayern's 7-0 thrashing of Hannover, continued where he left off last weekend by scoring the only goal in the 69th minute.

Picking the ball up 25 yards from goal, Robben's impressive strike took a slight deflection off the head of teammate Thomas Muller to wrong-foot goalkeeper Hugo Lloris.

Bayern were the better of the two sides, but they suffered an early setback when midfielder Franck Ribery, whose name has been linked to an alleged sex scandal in his native France, was sent off for a late challenge on Lisandro in the 37th minute.

Ribery lunged in with studs showing, catching Lisnadro on his ankle, and Italian referee Robert Rosetti had no hesitation in producing a straight red card, meaning the Frenchman will now miss the second leg in Lyon next week.

However, nine minutes after the break, Lyon's man advantage disappeared when Jeremy Toulalan, who had been booked for a foul on Robben just three minutes earlier, was shown a second yellow card for a high challenge.

Lyon had endured a long trip by road and rail to get to Munich and, like Barcelona in Milan 24 hours earlier, they appeared tired and lethargic throughout the majority of the match.