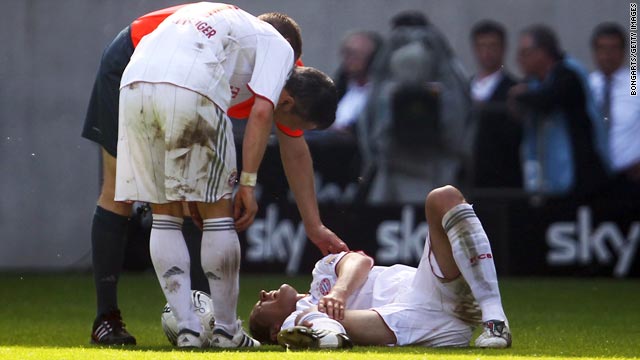 (CNN) -- Bayern Munich suffered a double injury blow ahead of the Champions League showdown with Lyon, as the German leaders' hopes of winning the Bundesliga title were dented by a 1-1 draw at Borussia Moenchengladbach on Saturday.

Central defenders Martin Demichelis and Daniel van Buyten are battling to be fit for Tuesday's second leg of the European semifinal in France after both suffered calf problems.

"Both players getting injured today is a drama," Bayern boss Louis van Gaal told the club's Web site. "I hope at least one of them recovers fitness before Tuesday."

Argentina international Demechelis went off at halftime while Belgium's Van Buyten followed 10 minutes after the break, then Marco Reus put the home side ahead on the counterattack soon after.

The Bavarians will definitely be without France midfielder Franck Ribery, who was sent off in the 1-0 first-leg win. Croatian Danijel Pranjic is also suspended after receiving his third booking of the tournament.

With two league matches to play, Bayern are still on course for a hat-trick of trophies this season, having already reached the German Cup final. Van Gaal's team have a 13-goal advantage over Schalke and next face two struggling teams in Bochum and Hertha Berlin.

Schalke required an 87th-minute winner from Heiko Westermann to edge past Hertha, who face relegation with a finish to their season against fourth-placed Bayer Leverkusen and then Bayern.

Westermann scored from close range after Hertha goalkeeper Jaroslav Drobny could only parry a shot from Jefferson Farfan.

Midfielder Torsten Frings netted a penalty in time added on after Cologne defender Pedro Geromel was sent off for handling the ball.

Milivoje Novakovic hit the bar in the second half for 12th-placed Cologne, while Bremen striker Hugo Almeida had a goal ruled out for offside before Frings settled the match.

Bayer Leverkusen also have 57 points after a 3-0 home cruise against second-bottom Hannover.

Striker Stefan Kiessling opened the scoring in the 25th minute, and his penalty sealed victory with two minutes left.

Turkish midfielder Burak Kaplan had earlier made it 2-0 in the 64th minute with a fine solo effort.

Borussia Dortmund are a point further back in fifth place after Argentine striker Lucas Barrios, who hopes to play at the World Cup for Paraguay, scored a hat-trick in the 3-2 win at Nuremberg.

Nuremberg were left hovering above the relegation zone on goal difference, having 28 points along with Bochum and Freiburg.

In Saturday's other game, ninth-placed Eintracht Frankfurt stayed a point above Mainz after a 3-3 draw against their hosts.