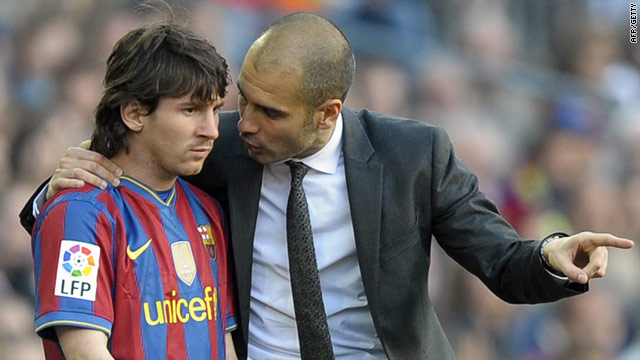 Barca coach Pep Guardiola will be looking to Lionel Messi in the Champions League return against Inter.
STORY HIGHLIGHTS

(CNN) -- Barcelona coach Pep Guardiola is spoilt for striking choice as his side attempt to overcome a two-goal Champions League semifinal deficit against Inter Milan, but faces a defensive poser with captain Carles Puyol suspended.

Puyol picked up a yellow card in the 3-1 defeat to Inter in the San Siro last weekend, ruling him out of the second leg, and he will be sorely missed at center back.

Barca know that the concession of an early away goal would leave them facing an uphill task against Jose Mourinho's Italian champions and Guardiola must chose between Rafa Marquez and Gabi Milito to partner Gerard Pique in the center of their defense.

He also is waiting on the fitness of full-back Eric Abidal, with Maxwell set to continue in his place.

Pique and Milito played together at Real Zaragoza and were outstanding in the recent 'El Clasico' win over Real Madrid so may well get the nod from Guardiola.

Pique is hoping the atmosphere in a capacity Nou Camp will make it an uncomfortable night for their opponents.

"I hope the atmosphere makes the Inter players hate their profession for 90 minutes," he told the official Barcelona club Web site.

"It all helps a great deal. I don't remember an atmosphere like this. People are so engaged, excited and confident. I feel really proud." he added.

Up front, Guardiola has no less than six in-form attacking options, with Lionel Messi and Pedro Rodriguez forming a lethal combination in recent matches while Swedish star Zlatan Ibrahimovic is returning to full fitness and scored in the weekend league win over Xerez.

Ibrahimovic wants Barca to stay true to their attacking instincts after being shaken out of their strike in the first leg.

"We have to be ready for this war," he told AFP.

"They are going to exploit their virtues but we cannot change our way of playing like we did in Milan. We lost because we did not play our usual football, not because they won with their approach.

Guardiola can also call on the likes of Thierry Henry, Bojan and young winger Jeffren as they attempt to break down Inter.

Mourinho's men got their Serie A title bid back in full swing with a weekend victory over Atalanta, but midfield talisman Wesley Sneijder was injured in the 3-1 win and is battling to be fit with a hamstring strain.