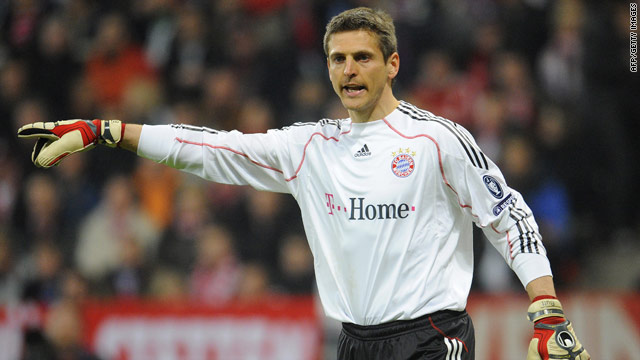 Bayern Munich's Hans-Jorg Butt has been given a World Cup chance due to an injury suffered by Rene Adler.
STORY HIGHLIGHTS
RELATED TOPICS

The 35-year-old Butt will be competing for a starting place with Schalke's Manuel Neuer and Werder Bremen's Tim Wiese as Bayer Leverkusen's Rene Adler has been ruled out with a rib injury.

Captain Michael Ballack, who plays for English club Chelsea, is the only man selected who does not feature in the German Bundesliga.

Stuttgart's Brazil-born forward Cacau is included, but his former clubmate Thomas Hitzlsperger misses out despite the absence of injured Leverkusen midfielder Simon Rolfes as he has not been playing regularly for his Italian club Lazio.

"This was a very difficult decision for me," Low told reporters on Thursday. "Thomas has never disappointed us and made a key contribution in helping us qualify.

"He is a reliable player, but he barely played in the last few months before he left Stuttgart and has also played very little at Lazio."

Low will reduce the squad to 23 by the June 1 deadline for submission ahead of the tournament's kick-off 10 days later.

Butt, who has won three caps, will not be able to feature in next Thursday's friendly against Malta as he will be needed by Bayern in the German Cup final against Bremen in Berlin on May 15.

The 21-year-old Badstuber has yet to win a cap for Germany and made his senior debut for Bayern in the first game of this season, covering at left-back despite being a central defender.

Attacking midfielder Muller, 20, will seek to add to his sole cap after also impressing this season, scoring the first hat-trick of his career in the 3-1 win over Bochum last weekend which effectively gave Bayern the league title.

Ballack will also be away playing for Chelsea in the FA Cup final on May 15, before joining the squad in Sicily with the Werder quartet, while the Bayern players will not be in camp until after the Champions League final on May 22.

Bayern, who had eight players in the squad that finished third on home soil four years ago, can complete the first leg of a potential treble by clinching the Bundesliga title this weekend, when Louis Van Gaal's side face bottom club Hertha Berlin.

Germany will face Hungary in Budapest on May 29 and then Bosnia-Herzegovina in Frankfurt on June 3 before heading to South Africa.