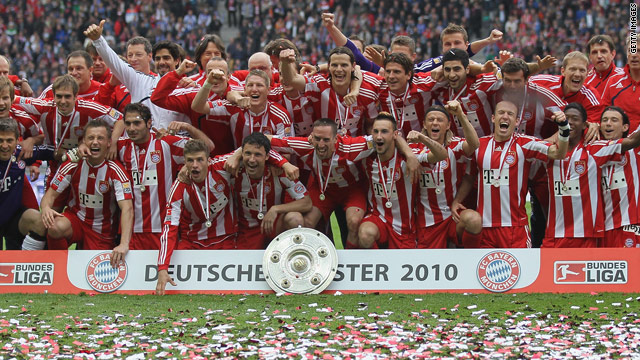 (CNN) -- Bayern Munich clinched the Bundesliga title for a record 22nd time thanks to a 3-1 away win over relegated Hertha Berlin on the final day of the German season.

Victory for the Bavarian giants -- who led the top division by three points from rivals Schalke going into the game -- came thanks to a 20th-minute opener from Ivica Olic and a second-half brace from star performer Arjen Robben.

The Dutchman's double, scored at 74 and 87 minutes, took the 26-year-old to a tally of 16 goals for the season and put Louis Van Gaal's men into an unassailable lead, after Gustavo Ramos had leveled for the home side with thirty minutes left of the game.

The defeat of bottom-placed Hertha also continues Bayern's pursuit of an unprecedented treble for a German side.

Can Van Gaal triumph over Mourinho?

We have the best defence, the best attack and deserved to be crowned champions
--Bayern coach Louis vn Gaal
RELATED TOPICS

"It is important that we won here," Bayern coach Louis van Gaal told reporters after being drenched in beer by his celebrating players.

"We have the best defence, the best attack and deserved to be crowned Bundesliga champions. It is good that we were victorious to keep the winning rhythm. Tonight, we will celebrate in style," the 58-year-old added.

Bayern finished the campaign on 70 points, five ahead of rivals Schalke, whose title ambitions were cut short with a 0-0 away draw to Mainz thanks to a missed penalty from Miroslav Karhan.

Former champions Wolfsburg ended a miserable season by finishing in eighth place, but did manage to end on a win, thanks to a 3-1 victory over Frankfurt.

Bochum's 3-0 home defeat to Hannover left the Rhineland-side consigned to relegation, and sealed a dramatic last-day escape for a Hannover side reeling from the loss of captain Robert Enke, Germany's number one goalkeeper who committed suicide earlier in the season.

Meanwhile, Nuremberg now face a play-off with the third-placed team in the second division to try and avoid the drop after beating Cologne 1-0.