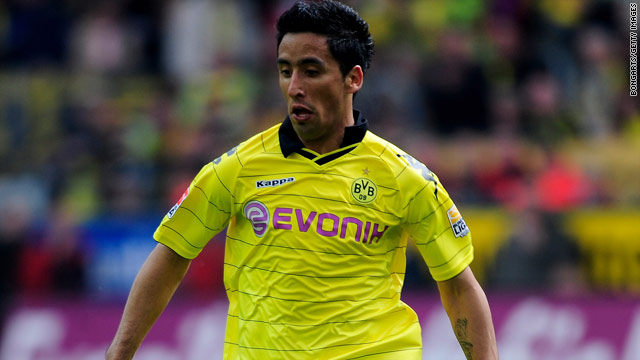 Lucas Barrios has made a strong start to his international career with Paraguay since switching nationalities.
STORY HIGHLIGHTS

Barrios, who has a Paraguayan mother, was given citizenship in April and scored in World Cup warm-up matches against the Republic of Ireland and the Ivory Coast.

Striker Salvador Cabanas was omitted from the initial squad despite being nearly recovered from head wounds after being shot in a bar in Mexico City in January.

The 20-year-old has won five caps since making his debut last September, and played the whole match as Mexico thrashed Gambia 5-1 on Sunday.

His father Geraldo, a Brazilian also known as Zizinho who played for Mexican clubs in the 1980s, said his son would now turn his back on the national team.

"Jonathan will not play for Mexico anymore," he told Mexican television network Televisa. "I love Mexico, I adore it, it is my country even though I am Brazilian but they cannot hurt him this way."

Blog: Who will be the World Cup's best player?

Aguirre picked nine defenders, including captain Rafael Marquez of Barcelona, who can also play in midfield.

Seven strikers were selected, including 21-year-old Carlos Vela and 37-year-old Cuauhtemoc Blanco, who came out of international retirement last April when Aguirre returned for his second spell in charge to help Mexico qualify.

Striker Miguel Sabah, who scored a late winner in a qualifier against the U.S. last August, was ruled out of Aguirre's earlier provisional squad by injury.

The 30-year-old, who plays for Argentine club Colon, was recalled for the 4-0 friendly win over Haiti on May 5 for the first time since winning his first two caps in 2003.

The group always welcomed Adriano, but there is a moment when reason talks louder than the heart
--Brazil coach Dunga
RELATED TOPICS

Blog: Is Messi better than Maradona?

Coloccini's Newcastle teammate Jonas Gutierrez made the cut despite playing in the English second division this season, with Liverpool's Maxi Rodriguez vying with him for a wing place.

Veteran striker Martin Palermo, 36, has the chance to play at his first World Cup, being one of five Argentina-based players selected by the 1986 title-winner Maradona.

The 36-year-old Zanetti, Argentina's most-capped player, was controversially axed by Jose Pekerman for the 2006 World Cup but then brought back by his successor Alfio Basile and retained by Maradona for the 2010 qualifiers -- though he lost the team captaincy to Javier Mascherano.

He was a key figure in Inter's charge to a hat-trick of trophies this season, having won the Italian Cup, Serie A and Champions League.

Cambiasso, who played in Germany four years ago and had a spot-kick saved in the quarterfinal penalty shootout defeat to the hosts, has not been called up since Maradona took charge despite establishing himself as one of the best defensive midfielders in Europe.

Become a CNN Super Fan: Why your country needs you!

Inter's Champions League final hero Diego Milito was selected despite playing a limited role in the qualifiers, and central defender Walter Samuel has the chance to feature at his second World Cup after missing out in 2006.

Center-back Martin Demichelis, who helped Bayern Munich win the German league and cup titles, was rewarded for his fine form this season.

Brazil coach Dunga ended the World Cup dreams of Ronaldinho and Adriano by omitting the duo from his final 23-man squad for the World Cup in South Africa.

The 30-year-old Ronaldinho, a two-time world player of the year, misses out for the second tournament in a row despite returning to form this season with Italian club AC Milan.

"Adriano was given several opportunities," the 1994 World Cup winner said. "There was a moment when we made a decision about the group. The group always welcomed Adriano, but there is a moment when reason talks louder than the heart."

Ronaldinho's Milan teammate Alexandre Pato also missed out, along with highly-rated Santos teenager Neymar, but Germany-based striker Grafite was included at the age of 31 after his fine form for deposed Bundesliga champions Wolfsburg.

Veteran striker Eddie Johnson missed out on his second World Cup after being cut from the 30-strong preliminary selection along with fellow forward Brian Ching, defenders Chad Marshall and Heath Pearce plus midfielders Alejandro Bedoya, Sacha Kljestan and Robbie Rogers.

Bradley's squad, which includes his son Michael, features 15 players who have never been to a World Cup alongside two-time veterans Steve Cherundolo, Landon Donovan and Marcus DaBeasley.

Defender Oguchi Onyewu and midfielder Stuart Holden are in the squad despite recent long-term injury absences.

Gomez and Robbie Findley did not play in any of the qualifiers -- and neither did their fellow forward Edson Buddle, who won his first cap since 2003 in the 4-2 friendly defeat by the Czech Republic on May 25.

Chile coach Marcelo Bielsa made defender Roberto Cereceda the unlucky man to miss out on the World Cup after Marco Estrada recovered from injury.

Having earlier dropped striker Hector Mancilla of Mexican side Toluca to whittle his squad down to 24, Bielsa dispensed with Colo Colo's Cereceda -- who had been brought in as cover.

Union Espanola's Luis Marin was given the third goalkeeping place behind captain Claudio Bravo of Real Sociedad and Miguel Pinto.

He had earlier omitted Cristian Rodriguez, with the Porto winger set to start a two-game ban after his red card in the final qualifier.

Penarol's Egidio Arevalo-Rios and Defensor Sporting goalkeeper Martin Silva were the only home-based players named in the final 23.

Like Dunga, Honduras coach Reinaldo Rueda took the unusual step of naming his 23-man squad well ahead of the June 1 deadline, plus seven reserves.

Key striker Carlos Costly is one of the standby players after being ruled out for four weeks with a foot injury, with his place taken by Georgie Welcome -- who in 2008 was the first Honduran to make his international debut while playing for a second-division side.

England-based Wilson Palacios, Hendry Thomas and Maynor Figueroa are named along with Italy-based forward David Suazo and 36-year-old Carlos Pavon, who is set to win his 100th cap.