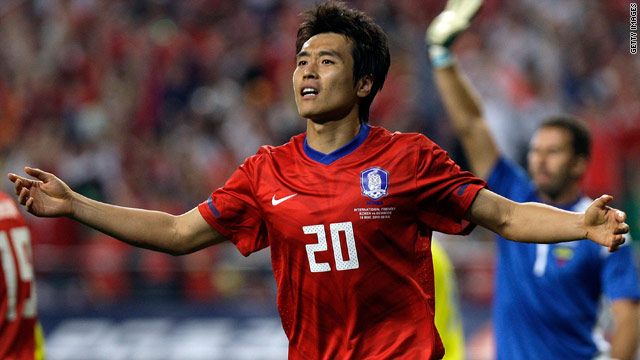 Lee Dong-Gook will go to his first World Cup since 1998 after being dropped in 2002 and injured in 2006.
STORY HIGHLIGHTS

(CNN) -- South Korea striker Lee Dong-Gook will go to the World Cup even though he may not be fit for his country's opening game in South Africa.

The 32-year-old missed Sunday's 1-0 defeat by Belarus with a hamstring injury and will also sit out Thursday's final warm-up match against Spain.

But he was named in coach Huh Jung-Moo's final 23-man squad with the hope of being ready to play in the republic's second Group B game against Argentina on June 17, five days after the opener against Greece.

"The team's medical and physical training staff agreed that he would be able to play from the second game. He won't have any trouble playing in the second and third match," Huh told the Yonhap news agency.

Lee went to the 1998 World Cup as a 19-year-old, but missed out as South Korea co-hosted the 2002 event with Japan and was injured just before the 2006 finals in Germany.

Huh dropped forward Lee Keun-ho and midfielders Shin Hyung-Min and Koo Ja-Cheol from his 26-man squad, while defender Kang Min-Soo was called in to replace the injured Kwak Tae-Hwi.

Manchester United midfielder Park Ji-Sung is captain in a squad that contains plenty of experience, including 33-year-old fullback Lee Young-Pyo -- who in 2008 was the seventh South Korean to win 100 international caps.

Winger Seol Ki-Hyeon, who played at the 2002 and 2006 World Cups, missed out on the initial 30-man squad as he is still recovering from a knee injury.

The 31-year-old former Celtic and Espanyol player will go to his second World Cup, having missed out at home in 2002 after suffering a knee injury in the second-to-last warm-up match.

Blog: Who will be the World Cup's best player?

Veteran goalkeeper Yoshikatsu Kawaguchi also kept his place after being called into the preliminary squad for the first time in 18 months.

Verbeek said the 21-year-old was not fit enough after playing through the season with painkilling injections to help a pelvic problem, despite the Dutchman having warned manager Gordon Strachan of English second division side Middlesbrough of the dangers.

"He's not free to play and his recovery is not quick enough to make it. I'm disappointed he will not be in the final 23," said Verbeek, who will stand down after the finals.

Galatasaray's Harry Kewell was picked despite his long-term groin problem, and is one of only three strikers alongside Josh Kennedy and Ukraine-born Nikita Rukavytsya.

Young midfielder Tommy Oar was dropped along with Shane Lowry, James Holland and goalkeeper Eugene Galekovic. However, the five players who missed out have still traveled to South Africa as reserves in case of injuries.

Become a CNN Super Fan: Why your country needs you!

Forward Hong Yong-Jo of Russian club FC Rostov made the cut along with fellow striker Jong Tae-Se and midfielder Ahn Yong-Hak, who were born in Japan and play in the J-League.

But fellow J-League star Ryang Yong-Gi and Kim Kuk-Jin of Swiss second-division side FC Wil were dropped from the preliminary squad as the Koreans go to the communist nation's first World Cup in 44 years.

Defender Aaron Scott was the only one of the 18 players who helped the All Whites qualify for the second time to miss out, with Reid and recent debutant Tommy Smith, 20, drafted in instead.

Reid and Smith had previously played for Denmark and England at youth level.

Defender David Mulligan was selected despite not playing at all last season for his Australian A-League club Wellington Phoenix, where he was also coached by Herbert.