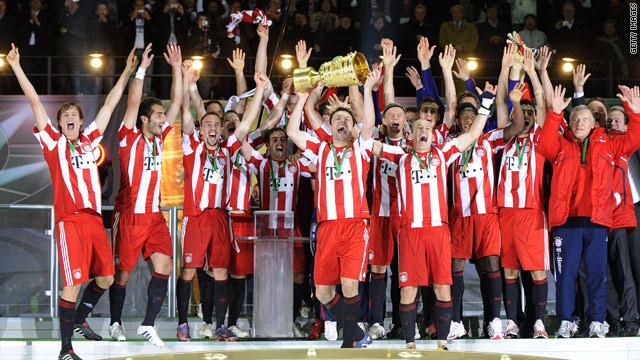 (CNN) -- Bundesliga champions Bayern Munich remain on course for a unique treble of trophies after crushing Werder Bremen 4-0 in the German Cup final on Saturday.

Bayern will now travel to Madrid for next weekend's Champions League final against Inter Milan in confident mood, after this impressive victory over their Bundesliga rivals.

The result never looked in doubt once Arjen Robben gave Louis van Gaal's side the lead in the 35th minute.

German international defender Per Mertesacker handled the ball in the penalty area and Dutch winger Robben made no mistake with the spot-kick.

And the match was over as a contest in the 63rd minute when a superb counter-attack saw Mark van Bommel play the ball through for Frenchman Franck Ribery to slide his shot coolly past goalkeeper Tim Wiese.

Werder's dismal afternoon was made even worse when former Bayern player Torsten Frings was sent offlate in the second-half after collecting two yellow cards.

The icing on Bayern's cake was provided by Bastian Schweinsteiger, who fired past Wiese after chesting down Phillipp Lahm's lofted pass.