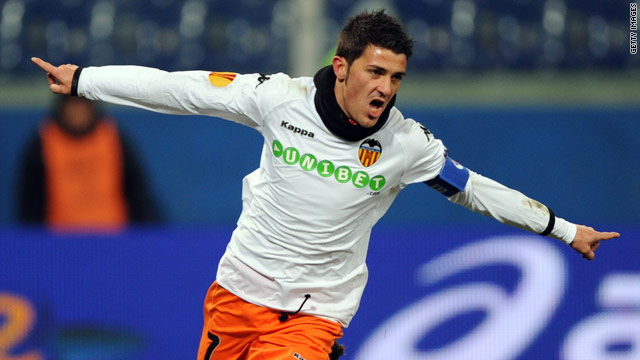 David Villa has been a prolific goalscorer for Valencia over the last five seasons.
STORY HIGHLIGHTS
RELATED TOPICS

The 28-year-old goalscorer will be in Barcelona on Thursday evening and will undergo a medical test on Friday morning, the Spanish champions said on their official Web site.

Villa scored 107 goals in five seasons for Valencia and lines up alongside Liverpool marksman Fernando Torres in the Spanish national team.

He was the tournament's leading scorer with four goals when Spain won the European Championship in 2008.

Catalan giants Barca are looking to strengthen their side ahead of next season -- after sealing the defence of the league title on Sunday with a record haul of 99 points.

Villa was linked to Barcelona last season but after the two clubs failed to reach a deal he stayed on at cash-strapped Valencia for another season.

Another successful season, in which Villa scored 29 goals in all competitions to help Valencia finish third to secure a place in the Champions League, persuaded Barcelona to move once again for the Spanish international striker.

Meanwhile, club president Joan Laporta has commented on rumors that Arsenal captain Cesc Fabregas is to make a return to the club he played for as a youth team player.

Fabregas has once again been strongly linked with leaving Arsenal amid media speculation that he wants to play once again for his home town club and Laporta said: "It's remarkable that a player should commit himself in this way (if the reports are true)

"If the club technical staff believe we need to make the extra effort and sign him, we'll speak to Arsenal," Laporta added.

Barcelona have also confirmed that Argentine international defender Gabriel Milito will remain at the club after signing a new contract until 2012.