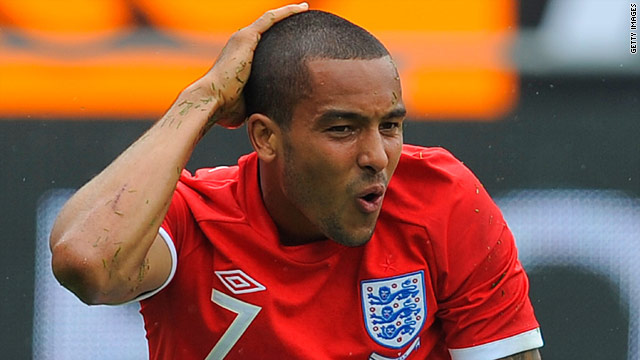 (CNN) -- Arsenal winger Theo Walcott is the surprise omission from England coach Fabio Capello's World Cup squad but there is a place for injury-threatened Gareth Barry.

The Manchester City midfielder has been included after Capello decided he would be fit to take part at the tournament, while Chelsea's Joe Cole and Tottenham's Ledley King has also been included.

In 2006, Walcott was a surprise inclusion in then-coach Sven Goran Eriksson's squad at the age of just 17, but he has missed out four years on.

The winger said in a statement on Arsenal's official Web site: "I am very disappointed not to be included in the squad going out to South Africa, but completely respect Mr Capello's decision.

Blog: Will "the Force" be with Capello at World Cup?

"I would like to wish the team the best of luck and hope they have a really successful tournament."

Aston Villa defender Stephen Warnock has been included despite not featuring in either of England's warm-up games. He only has six minutes of international action to his name back in 2006.

Manchester United midfielder Michael Carrick has been included, while Manchester City's Shaun Wright-Phillips is included at the expense of his teammate Johnson.

Despite picking up a knee injury in training earlier this week, Juventus midfielder winger Mauro Camoranesi kept his place.

Injuries to Michael Ballack, Christian Trasch and Heiko Westermann trimmed Low's squad and Beck is the only casualty.

Low has named Philipp Lahm as his new national captain in the absence of the injured Ballack.

Slovakia have included three players recovering from injury in their 23-man squad to travel to South Africa.

Coach Vladimir Weiss has gambled by selecting Liverpool defender Martin Skrtel, who is recovering from a foot injury, and strikers Filip Holosko of Besiktas and Robert Vittek of Lille, who are returning from a broken leg and a knee problem respectively.

"There are still question marks," Weiss was quoted as saying on FIFA's official Web site. "In case of an injury anything can happen."

The 21-year-old, who plays for Italian club Palermo, will have scans later this week. He is one of Denmark's first-choice central defenders alongside Liverpool's Daniel Agger.

Olsen, who won more than 100 caps as a player and took Denmark to the 2002 World Cup, retained defender Patrick Mtiliga.

Against Senegal, the Malaga player made his first appearance since his debut in November 2008.

PSV Eindhoven's Engelaar started all four matches at Euro 2008 as the Dutch reached the quarterfinals.

The squad includes Feyenoord defender Giovanni van Bronckhorst, 35, who has announced he will retire after the month-long tournament.

Dutch champions Twente have only one player in the squad, goalkeeper Sander Boschker.

Van Nistelrooy left Real Madrid to join German club Hamburg to revive his hopes following a serious knee injury, but Van Marwijk said the player had not returned to a high enough level to be selected.

Winger Pedro Rodriguez, 22, was named along with his Barcelona teammate Victor Valdes, who edged out 19-year-old David De Gea of Atletico Madrid and Villarreal's Diego Lopez for the third goalkeeping place.

"They have had a good season, they are coming to strengthen the squad as substitutes for other players," Del Bosque told reporters.

Martinez's fellow under-21 international, Osasuna defender Cesar Azpilicueta, missed out along with midfielders Santi Cazorla and Marcos Senna, who both featured when Spain won Euro 2008.

Sevilla striker Alvaro Negredo was also chopped, as was another member of the triumphant 2008 squad, Dani Guiza.

Del Bosque is giving England-based stars Fernando Torres and Cesc Fabregas every chance to be fit, retaining the duo as they recover from injuries.

Midfielder Andres Iniesta is also expected to be ready, having returned from a calf problem in the last game of the Spanish league season as Barcelona claimed the title.

Barcelona's 19-year-old Bojan Krkic, who missed Spain's Euro 2008 success at his own request due to fatigue, did not even make the initial 30-man squad named earlier this month.

France coach Raymond Domenech has decided not to replace Lassana Diarra, who has been ruled out with a stomach problem, meaning his 23-man selection has been finalized ahead of the June 1 deadline.

Real Madrid midfielder Diarra has been ordered to rest after breaking down during the team's training camp.

Domenech has backed defender Williams Gallas to be fit, despite having been sidelined since March with a calf injury.

Gallas's Arsenal clubmate Samir Nasri missed out on the initial squad, along with Real Madrid striker Karim Benzema, while the omission of veteran midfielder Patrick Vieira meant Thierry Henry was the only survivor from the 1998 World Cup-winning squad.

Portugal coach Carlos Queiroz named a 24-man squad due to doubts over a couple of players including Real Madrid defender Pepe, who has only just returned to training after being sidelined since December.

Goalkeepers Beto and Daniel Fernandes were named as deputies to Braga's Eduardo despite not playing in any of the qualifiers, but there were no other surprises for the 2006 semifinalists, who will be led by Real superstar Cristiano Ronaldo.

Slovenia boss Matjaz Kek kept faith with the players who helped the small East European nation qualify for the second time when he named his 30-man squad.

Greece coach Otto Rehhagel has picked Christos Patsatzoglou and Giorgos Seitaridis despite the duo's struggles with injuries this season.

Switzerland defender Christoph Spycher has pulled out of coach Ottmar Hitzfeld's experienced 23-man squad for the finals after failing to overcome a knee injury.

The 32-year-old, who had already decided to retire from internationals after the tournament, has been replaced by Ludovic Magnin -- one of seven reserve players named by the German.

Hitzfeld has stuck with the likes of Blaise Nkufo of Dutch champions Twente, fellow striker Alexander Frei and midfielder Hakin Yakin, who are all 30 and above.

Defender Philippe Senderos was included despite his lack of action with English club Arsenal, while Sampdoria midfielder Marco Padalino and Kosovo-born Swiss under-21 international Xherdan Shaqiri were also included.