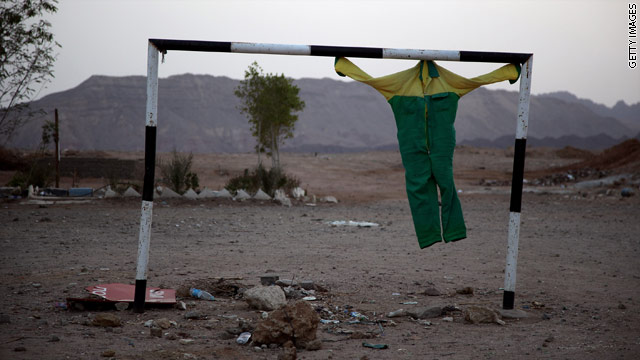 Many Africans are too poor to be able to afford to buy World Cup tickets or to travel to South Africa.
STORY HIGHLIGHTS

Johannesburg and London (CNN) -- With most Africans unlikely to take part in the continent's first World Cup, soccer's governing body FIFA is hoping that mobile-phone television coverage can extend the showpiece tournament's audience.

Fewer than 40,000 of the total three million tickets available have been sold to Africans outside the host nation, despite the region's qualified nations Nigeria, Ghana, Cameroon and Algeria having a combined population of more than 225 million.

One significant factor is ticket prices. While South Africans have been offered reduced deals as low as $15, other people on the world's poorest continent must pay the standard prices from $80 upwards.

Travel is also a problem. Flights are unaffordable for most Africans, while the vast distances involved through difficult and often dangerous terrain make road travel a major mission -- it is 5,000 miles (8,000 kilometers) from Algiers in the north to Cape Town.

Add to that the high cost of tourist accommodation in South Africa, and it becomes obvious why the June 11-July 11 tournament will not be truly "Africa's World Cup" as FIFA had first intended.

FIFA has pulled in $3.2 billion in revenue for the 2010 World Cup, much of that through television rights, and is hoping that Africans will continue their ever-increasing love of mobile technology by watching the World Cup on that platform.

While the Internet has proved less accessible and affordable for Africans, mobile phones have taken off in a big way. A United Nations report released last year showed that mobile subscriptions in Africa rose from 54 million to almost 350 million between 2003 and 2008.

"It's an important complement to the main TV screen," FIFA's Niclas Jensen told CNN. "It's important for us to be there. It would be foolish to say that we do not need to service that medium because then we will lose people who will watch our games.

African pay TV giant MultiChoice is one of the companies preparing to offer mobile TV during the World Cup. It has launched the service in Kenya, Nigeria, Ghana and Namibia through its subsidiary DSTV Mobile.

However, its plans for launch in South Africa were hit last Friday after it missed the application deadline for a licence and was disqualified by telecoms regulator ICASA.

E.tv was the only provider to receive a licence, with the South African Mobile TV Consortium -- which had objected to the May 7 application deadline -- also missing out.

"I think in Africa, mobile TV has a better chance of succeeding than in first-world countries," DSTV Mobile chief executive Francois Theron told CNN before the ruling was announced.

"A lot of the matches will be broadcast while people are commuting from work back home, and in countries like Lagos and Kenya and those places you will find that they are commuting for three or four hours, so it's an ideal tool to have while you are sitting in the traffic waiting for the time to pass.

"Eventually, these kinds of phones, we believe Nokia will bring the price down to below $100 over time."

However, research group World Wide Worx says only one percent of the African market is interested in mobile TV.

"There was a massive campaign to market mobile TV in South Africa for the 2006 World Cup in Germany and it fell completely flat," the group's head Arthur Goldstuck told CNN.

"It's very uncomfortable to view TV on a cell phone screen. It simply doesn't make sense for a sporting event where the ball, for example, will completely disappear."

The issuing of licences to operators in South Africa has been a long process, CNN's Nkepile Mabuse reports.

"In 2008 I remember the former communications minister saying licences would be issued that year," she said.

ICASA chairman Paris Mashile told CNN that there had been mitigating factors for the delay.

"If you look at the steps and processes that have got to be taken, you've got to take that into consideration," he said.

"With stakeholders asking for an extension of period to consider our proposals, and participating deliberation and consultation processes, these things take time and you've got to accommodate all the people."

Which countries are buying tickets?

Meanwhile, FIFA has revealed that South Africans have bought more than 1.25 million tickets for the World Cup.

The United States had the next highest sales with about 135,000 and the United Kingdom -- from which only England has qualified -- was next with just under 100,000.

At the other end of the scale, five countries had bought just two tickets each: Guinea, North Korea, Maldives, Saint Vincent and the Grenadines, and Sao Tome and Principe.