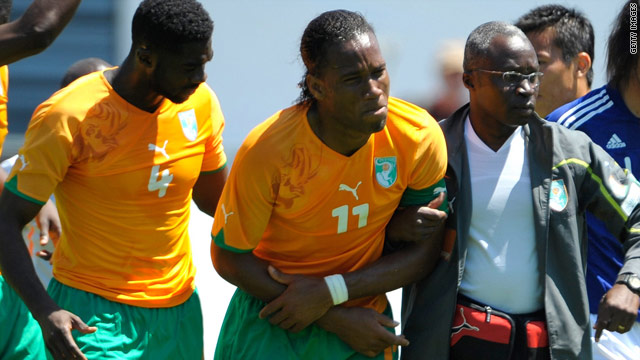 Didier Drogba is led from the field after breaking his arm during Ivory Coast's friendly with Japan.
STORY HIGHLIGHTS

(CNN) -- Ivory Coast striker Didier Drogba has rejoined his teammates at their training base in Switzerland after successful surgery on his broken arm.

It had been feared Drogba would miss the World Cup after he picked up the injury during a collision with defender Marcus Tulio Tanaka in a friendly against Japan on Friday.

The Chelsea forward was immediately taken for surgery, which was a success, according to a spokesman for the Côte d'Ivoire Football Federation, but it remains to be seen how big a part he will play in the tournament.

"His recovery has been extremely encouraging," spokesman Roger Kouassi was quoted as saying by the UK Press Association.

"It is suggested that, at this stage, all the signs are good and there is great hope the captain of the Elephants will be in action with his teammates as soon as possible."

Drogba is seen as vital to coach Sven Goran Eriksson's plans, especially as Ivory Coast have been drawn in the so-called group of death alongside Brazil, Portugal and North Korea.

The 32-year-old scored 37 goals for Chelsea last season and is the current African player of the year.

Ivory Coast are set to play a friendly against local side Lausanne Sports on Tuesday before flying out to South Africa on Wednesday.

Their opening game is against Portugal on June 15 in Port Elizabeth.