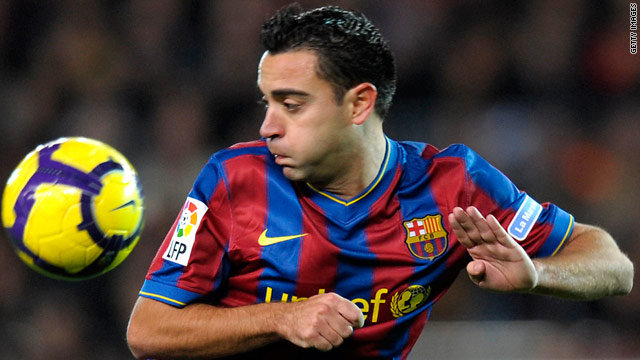 Xavi Hernandez has signed a new deal to keep him at Spanish champions Barcelona until 2016.
STORY HIGHLIGHTS

(CNN) -- Xavi Hernandez has signed an extended deal with Barcelona that will keep him at the Camp Nou for the rest of his career, the Spanish club have announced.

The midfielder's new contract will be triggered if he plays in over half of Barcelona's games in the final two years of his current deal.

Should he hit all the club's targets he will be at Barcelona until 2016, when he'll be 36. Xavi is currently preparing for the World Cup with Spain.

Young winger Pedro Rodriguez has also signed a new deal until 2015, with an improved salary and a new release fee of $108 million.

Xavi told Barcelona's official Web site: "I want to hang up my boots here. I wanted to know that I'm not going anywhere.

"I'm very grateful to president [Joan] Laporta and director of sport Txiki Begiristain because they listened to me. It's what I want. I'm a big Barca fan and I'm very happy.

I've been involved with Barca all my life and I'd like to hang up my boots here.
--Xavi Hernandez, FC Barcelona
RELATED TOPICS

"I've been involved with Barca all my life, coming up through the ranks, and I'd like to hang up my boots here. My only objective is to retire here."

Club president Joan Laporta said: "It's great news for the club. Xavi's story is a really nice one. A boy who played in the youth teams and made his first team debut when he was 18.

"We should be grateful to Xavi. From the moment he became one of the captains of the team, with players like Puyol, Iniesta, Valdés, Messi and Piqué, he has shown the personal and sporting profile which proves that the youth academy has triumphed."

Pedro has already won seven trophies at Barcelona after making his debut for the club in 2008 and scored 23 goals in all competitions last season.

The 22-year-old told the official Web site he was delighted with his improved contract: "I'm very happy. I'd like to thank the board for the support they have given me.

"Without Mr Laporta this wouldn't have been possible. The players will always remember him."

Pedro is also in Spain's World Cup squad, which flies out to South Africa on Wednesday.