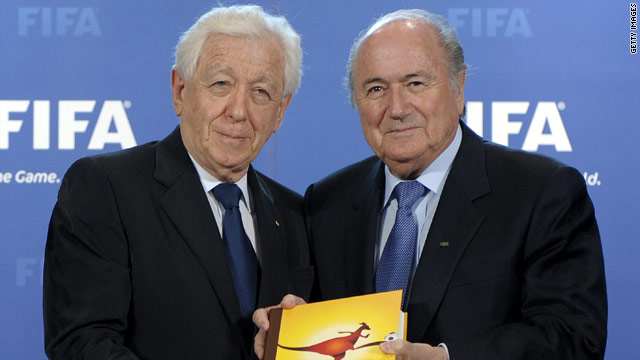 (CNN) -- Australia has pulled out of the race to stage the World Cup in 2018 and will instead focus their attention on securing the 2022 tournament, FIFA have confirmed.

The game's governing body said Football Federation Australia (FFA) had taken the decision after they realized there was "growing movement" to hold the 2018 competition in Europe.

Australia's decision means the United States are the only non-European country still in the running to host the tournament. The other 2018 bids are from England, Russia, Spain/Portugal and Holland/Belgium.

FIFA secretary general Jerome Valcke said in a statement on Australia's official bid site: "The FFA have displayed an exemplary level of solidarity with Europe and the European bidding nations and were among the very first to enter into an open and constructive dialogue with me after it became apparent that there was a growing movement to stage the 2018 FIFA World Cup in Europe.

"Their announcement of today, therefore, to henceforth focus solely on bidding for the 2022 FIFA World Cup is a welcome gesture that is much appreciated by FIFA's leadership and executive committee. We wish to thank Mr Lowy, the FFA and the Australian Government."

Lowy confirmed Australia's decision to step aside and increase the chances of a European country winning the bid.

He said: "We have been in discussion with FIFA for months and it is that trusting relationship with the leadership of the governing body that has caused us to focus on 2022 and decide to leave the field for 2018 to European contenders."