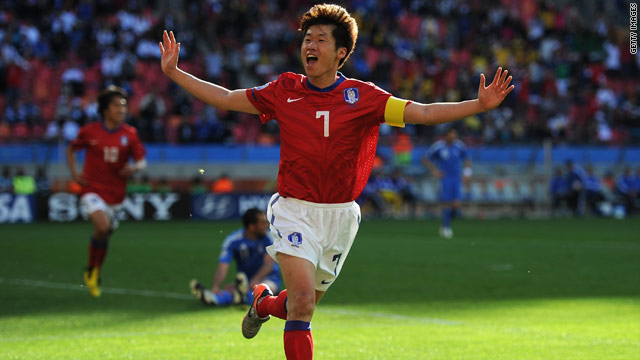 (CNN) -- Goals from Lee Jung-Soo and Park Ji-Sung earned South Korea a comfortable 2-0 win against Greece in the opening match of Group B played in Port Elizabeth.

The 2002 World Cup semifinalists created a string of chances against a poor Greek side who never looked like getting on the score sheet.

South Korea should have gone 2-0 up after 23 minutes when Monaco striker Park Chu-Young was sent through on goal by a defense-splitting pass from the boot of Park Ji-Sung.

Chu-Young was only denied by a fine save from Greek goalkeeper Alexandros Tzorvas which saw the ball cannon onto the roof of the net.

The Greeks were fortunate not to be further behind at half time as South Korea continued to push forward with a series of incisive moves.

Aside from a chance which fell to defender Vasileios Torosidis in the third minute, and an error from South Korea's goalkeeper Jung Sung Ryon late in the first half Greece never looked like scoring.

The second half carried on where the first finished off, and it was no surprise when Park Ji-Sung added a second for South Korea after 52 minutes.

Latching on to a mistake made by Loukas Vyntra, the Manchester United midfielder swept forward into the penalty area before coolly slotting past a helpless Tzorvas.

The goal did seem to finally wake Greece from their slumber, and striker Theofanis Gekas forced a fine save from Jung Sung Ryon in the 80th minute but it was a rare moment of skill in a woeful display by the 2004 European Champions.

Moments later, Lee Chung Young nearly added a third for South Korea at the other end.

The result means Greece continue their winless World Cup finals record. Their only other appearance in 1994 finals yielded no goals and no points.

South Korea face a sterner test next Thursday when they meet Argentina in Johannesburg, while the Greeks meet Nigeria in Bloemfontein.