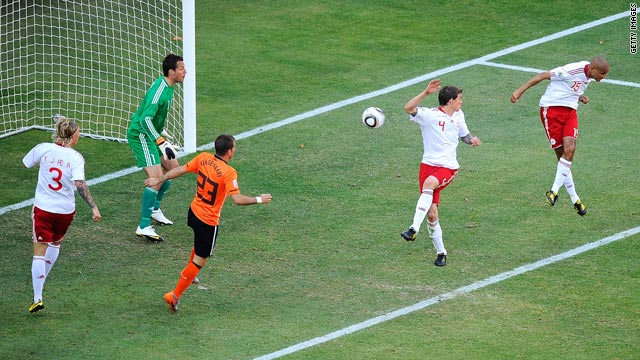 Denmark defender Simon Poulsen, far right, heads the ball off the back of teammate Daniel Agger and into his own net.
STORY HIGHLIGHTS

(CNN) -- The Netherlands made a winning start to their World Cup campaign as a moment of defensive madness cost Denmark dearly in Johannesburg, while Japan defeated a disappointing Cameroon 1-0 in Monday's other Group E match.

The Dutch failed to live up to their pre-tournament billing as one of the favorites, needing an own-goal less than a minute into the second half to settle their nerves and pave the way for an eventually comfortable 2-0 victory.

Dirk Kuyt sealed the win with five minutes left, then defender Simon Poulsen -- earlier at fault for the opening goal -- made a spectacular clearance from under his own crossbar to prevent an even more damaging defeat.

Keisuke Honda was the hero for Japan in Bloemfontein as his first half goal proved enough to beat 1990 quarterfinalists Cameroon and give the Asian side their first World Cup win on foreign soil.

The Netherlands started the match in at Soccer City with star forward Arjen Robben on the substitutes' bench still resting his injured hamstring, but still boasted attacking potency in Robin Van Persie and Kuyt plus the midfield presence of Mark van Bommel and Rafael van der Vaart.

But Denmark slightly edged the first half as striker Nicklas Bendtner -- who made a surprise recovery from injury to start the match -- headed wide, and then set up Thomas Kahlenburg for a shot that was well saved by Dutch goalkeeper Maarten Stekelenburg.

But the game turned some 40-odd seconds after the halftime restart when Poulsen, who plays for Dutch club AZ Alkmaar, inexplicably headed Van Persie's cross onto the back of his helpless teammate Daniel Agger and into the net.

The unlucky Agger was later credited with the own-goal by world governing body FIFA.

With Bendtner going off after an hour, the Danes lost all attacking impetus despite the introduction of 18-year-old forward Christian Eriksen, the youngest player to appear so far at this year's tournament.

It became only a matter of time before the Dutch extended their lead, with Wesley Sneijder's deflected shot looping onto the top of Thomas Sorensen's crossbar.

Kuyt wrapped it up soon after with a simple chance, following up as Eljero Elia broke free down the left and beat Sorensen with his low shot but hit the post.

Poulsen then made some amends for his earlier error as he got back to clear with Sorensen again beaten in the 88th minute.

"The players were a little tense and frustrated in the first-half, we wanted to play beautiful football, but we lost the ball too often," Netherlands coach Bert van Marwijk told AFP.

"Things got better after the first goal, then you saw what we are capable of doing, we could have won by more. It was a huge relief when the second goal went in."

Both Japan and Cameroon came into the World Cup on a poor run of form, with the Asian team having lost four of the previous five games and the Africans winless in seven.

After a dull opening, Japan started to press forward and deservedly took the lead seven minutes before the break.

Daisuke Matsui swung over a deep cross from the right which eluded the entire Cameroon defense before landing at the feet of Honda, who calmly passed the ball into the net.

Cameroon captain Samuel Eto'o, who appeared isolated on the right wing in the first half, carved his side's first real opportunity early in the second.

Cutting in between three defenders, the Inter Milan forward cut the ball back from the byline and teed up Eric Choupo-Moting, whose curled shot went narrowly wide.

Japan, who reached the last 16 on home soil in 2002, were organized and disciplined throughout and could have extended their lead when Makoto Hasebe's long-range strike drew a flying save from Hamidou Souleymanou. Shinji Okazaki fired the rebound against a post, only to be flagged offside.

Moments later, the woodwork was shaking again at the other end of the pitch as Stephane Mbia's fierce shot from outside the area smashed against the crossbar.

Cameroon, the highest-ranked African side at the tournament, laid siege to the Japan goal in stoppage-time but could not find a way past the impressive Eiji Kawashima.