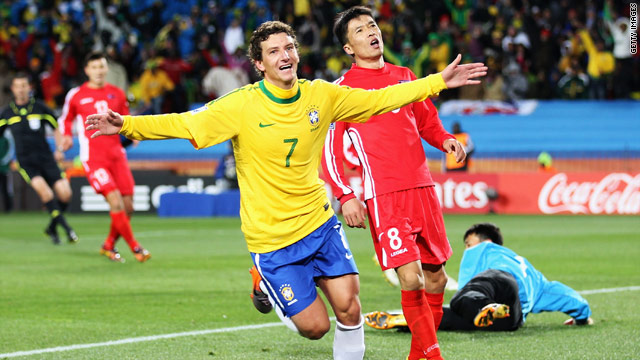 (CNN) -- Five-time winners Brazil opened their World Cup campaign with a nervy 2-1 victory over a spirited North Korea in Johannesburg after the Ivory Coast and Portugal had played out a 0-0 draw in Tuesday's other Group G match.

In a contest between the tournament's highest and lowest ranked teams, Brazil were unable to break down the Asian side in a goalless first half, but defender Maicon settled their nerves with a ferocious strike from a tight angle.

Elano's crisp finish from a defense-splitting Robinho pass gave the South Americans a 2-0 lead but Ji Yun-nam fired past Julio Cesar to give North Korea a deserved consolation goal.

Earlier in Port Elizabeth, Portugal star Cristiano Ronaldo struck the post with a 30-yard drive in the first-half of a cagey match, before Ivory Coast striker Didier Drogba -- playing 11 days after breaking his elbow -- wasted an opportunity to win the game when he dragged his shot wide in stoppage-time.

Brazil, seeking a record-extending sixth title, were expected to win with ease against a side making their first appearance in the tournament since 1966, but the North Koreans made life difficult for their illustrious opponents.

The first half was a story of resolute defending by the Asians in the face of wave after wave of Brazil attacks.

Brazil struggled to get behind the Korean defense and most of their shots came from outside the area with both Elano and Robinho wayward with early efforts.

On the few occasions that Brazilian players did make it to the byline, their crosses were blocked by committed and skilful pieces of defending.

The second period started in similar fashion, with Robinho and Michel Bastos both missing from range before the opening goal finally arrived in the 55th minute.

Kaka picked out the overlapping run of Maicon and the right-back slashed a swerving shot inside the goalkeeper's near post.

Brazil's second goal owed everything to a perfectly measured pass through the defense by Robinho to his former Manchester City teammate Elano, who produced a crisp side-footed finish into the far corner.

Dunga's men were given a late scare when North Korea crafted a fine goal.

A long ball was headed into the path of Ji Yun-nam, who raced into the area and lashed a shot past Julio Cesar.

"I believe the first match is always trying, there was a lot of nervousness, and anxiety," Brazil coach Dunga told AFP.

"We all want to score and not concede any goals. I am not entirely happy with the result, we weren't passing as quickly as I would have liked. But the spirit of these players is strong and they are willing to learn."

North Korea coach Kim Jong Hun was proud of his players and saw reason for encouragement ahead of their remaining games against Portugal and Ivory Coast.

"We managed to fend them off whether they were attacking down the wings or through the middle," he said.

"We didn't win, but we have picked up some confidence and I think we will do well in the next two games."

One of the most eagerly-anticipated games of the tournament featured little goalmouth action, with the exception of a moment of magic from the world's most expensive player.

After 10 minutes, Ronaldo, who has not scored for his country in 16 months, made space for himself with a sharp turn and curled a right-footed shot from 25 yards which had goalkeeper Boubacar Barry well-beaten but cannoned back off the post.

It was the only noteworthy moment of an otherwise dull first half, which featured plenty of probing from both sides but very little goalmouth incident.

Ronaldo was shown a yellow card after 20 minutes when he failed to win a free-kick and was involved in a spat with Ivory Coast defender Guy Demel, who was also booked.

The Africans saw plenty of the ball but did not create their first real opening until a minute after halftime when the lively Gervinho raced down the left and fired a powerful shot, which Eduardo tipped around the post.

With the game starting to open up, Ivory Coast winger Salomon Kalou found space in the area but fired his shot straight at Eduardo before Liedson's header from Deco's cross at the other end was easily held by Barry.

Drogba entered the fray after 65 minutes but saw little of the ball until the 92nd minute when Abdelkader Keita slid him clear, only for the striker to screw his shot wastefully across the face of goal.