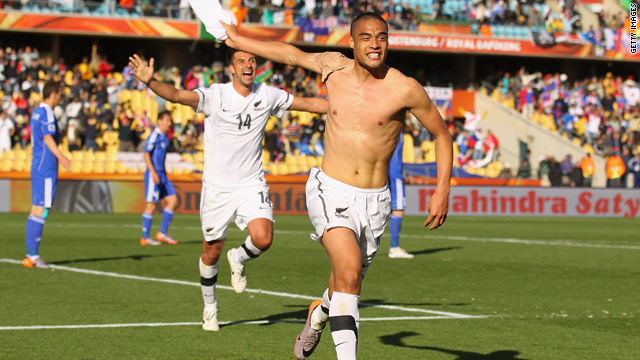 The 1-1 draw left all four teams in Group F on one point after Paraguay held defending champions Italy to the same score on Monday night.

A 50th-minute goal from striker Robert Vittek in Rustenburg had seemed set to settle a clash between two of the tournament's smaller nations -- Slovakia has a population of around 5.4 million; New Zealand has about 4.3 million people.

But a stubborn New Zealand side, returning to soccer's biggest stage for the first time since their debut in 1982, hit back in the third minute of time added on to secure the nation's first-ever point from their fourth World Cup finals game.

Video: Who are the stars of the World Cup?

Video: Who could win the World Cup?

Defender Winston Reid, who had been beaten in the air by Vittek for the opening goal, ghosted in behind the Slovakian defense to glance a header from Shane Smeltz's cross into the net off the base of the post.

Italy stutter to draw with Paraguay

It was a bitter blow for the European side -- which gained independence from the former Czechoslovakia in 1993 -- after having dominated the second period.

"It is just a nightmare. We could have had three points, and at the end it felt like we have lost the match," Smittek told AFP.

His coach Vladimir Weiss added: "During the match we were the better team, it is just a pity we did not take the opportunities we had.

"The mood in the dressing room is very sad but that is football. We have to cope with the sadness and I hope we will perform well in the next match."

We are very, very proud. You would have to say this is our best-ever result
--NZ coach Ricki Herbert
RELATED TOPICS

"We are very, very proud. You would have to say this is our best ever result. We have never picked up a point in a World Cup before. We have come and thrown some extremely good punches and got what I thought was a fully deserved result."

New Zealand coach Ricki Herbert went to the finals in Spain 28 years ago, where his team lost to Brazil, Scotland and Russia.

"We are very, very proud. You would have to say this is our best-ever result," he told AFP.

"We have come and thrown some extremely good punches and got what I thought was a fully deserved result."

New Zealand had the better chances of the first half as Chris Killen failed to test Jan Mucha with an early close-range header and then fellow striker Smeltz fired a stinging shot that the goalkeeper turned into the sidenetting.

The Kiwis, known as the "All Whites," mixed battling defense with some shaky moments at the back as goalkeeper Mark Paston was lucky to escape after a complete miskick and some ineffectual attempts to clear crosses.

And it was the aerial route that provided Slovakia's breakthrough five minutes after halftime as Vittek managed to evade Reid and head home a cross by Stanislav Sestak.

Reid made a goal-saving challenge on Vittek in the 69th minute, and Slovakia's failure to capitalize on their possession gave New Zealand the chance to mount a late assault.

Smeltz, the top scorer in the Australian A-League, should have found the target with a header in the 88th minute but made amends when he curled a tantalizing cross towards Reid in injury-time.

New Zealand next play Italy in Nelspruit on Sunday, when Slovakia face Paraguay at Ellis Park in Johannesburg.