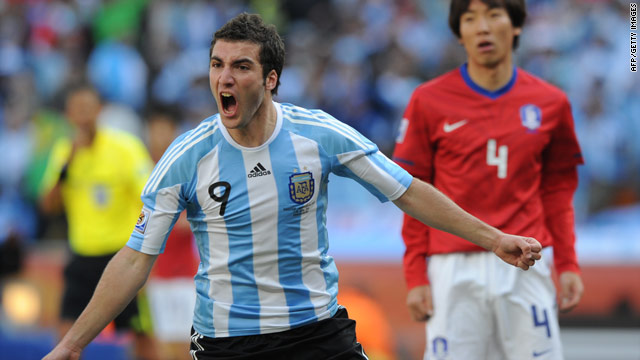 (CNN) -- Gonzalo Higuain scored the first hat-trick of the 2010 World Cup as Diego Maradona's Argentina took a big step towards qualifying for the second round by crushing South Korea 4-1 in Johannesburg on Thursday.

In a tournament so far largely lacking attacking flair, the South Americans showed fine style in following up their 1-0 opening Group B victory against Nigeria, who later slipped to their second defeat as they went down 2-1 to Greece in the second match of the day in Bloemfontein.

Argentina's winning margin was the second-highest so far at the South African event, behind only Germany's 4-0 thrashing of Australia.

"I have to commend my boys for the great job they have done, the only way South Korea would have made our lives difficult would have been if we had allowed them to," Maradona told AFP.

"We were never worried about them and they never upset us."

South Korea, who defeated the Greeks in their opening match, had battled back to 2-1 just before halftime after conceding an unlucky early own-goal, but could not contain the counter-attacking prowess of an Argentina side spearheaded by the mercurial Lionel Messi.

I have to commend my boys for the great job they have done, we were never worried about them and they never upset us
--Diego Maradona
RELATED TOPICS

But while Messi was an ever-present threat, it was Real Madrid striker Higuain who reaped the rewards with three close-range finishes, two in the final 15 minutes.

The Koreans made the worst possible start when striker Park Chu-Young inadvertently deflected the ball into his own net off his knee in the 16th minute after teammate Park Ji-Sung failed to cut out Messi's curling free-kick from wide on the left.

Higuain doubled the lead just after half an hour with a header when a cross by Maxi Rodriguez -- starting in place of the injured Juan Sebastian Veron -- was flicked on by substitute Nicolas Burdisso.

South Korea pulled a goal back on the stroke of halftime as Lee Chung-Yong pounced on an error by Argentina defender Martin Demichelis, but Yeom Ki-Hun squandered a golden chance to level in the 58th minute.

Higuain made it 3-1 in the 76th minute after Messi's first shot was blocked by the legs of goalkeeper Jung Sung-Ryong and his second rebounded kindly off the base of the post.

Messi and substitute forward Sergio Aguero then combined superbly to set up Higuain for another header four minutes later.

Argentina will be without Jonas Gutierrez for the final game against Greece after the makeshift defender -- who usually plays as a winger -- received his second booking of the tournament.

Victory for Greece was their first in the World Cup finals but owed much to a moment of madness by Nigeria's Sani Kaita.

The Super Eagles led through a free kick from Kale Uche after 16 minutes which crept past Alexandros Tzorvas in the Greek goal.

They were generally in charge until Kaita kicked out needlessly at Vasileios Torosidis and was shown a red card after 33 minutes.

Greece pressed forward and equalized just before halftime as Dimitrios Salpingidis saw his shot deflected into the net off Nigeria's Lukman Haruna.

It was the first-ever goal in the World Cup finals for the Greeks.

The highlight of the second half was a spell which saw Theofanis Gekas superbly denied by Nigerian goalkeeper Vincent Enyeama before Nigeria broke upfield with Yakubu Ayegbeni forcing Tzorvas into a smart save and Chinedu Ogbuke Obasi missed a clear chance on the follow-up.

But soon after pulling off his fine save, Enyeama was deceived by a powerful shot by Alexandros Tziolis and Torosidis smashed in the rebound from close range for the eventual winner.

The results mean Argentina are all but assured of qualification for the last 16, but still need a point in their final group game against Greece to make absolutely sure.

Even Nigeria are not entirely out of it, but would require a big win over South Korea to have any chance of progressing to the knockout stage.