Cameroon knocked out as Denmark win puts Dutch into second round 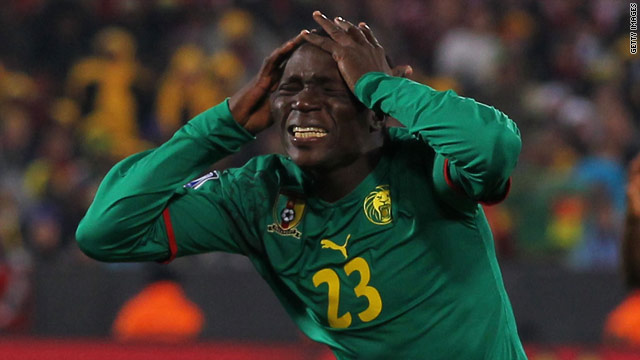 (CNN) -- Cameroon became the first team to be eliminated from the World Cup in South Africa after Saturday's 2-1 defeat by Denmark, which made the Netherlands the first team to reach the second round following an earlier 1-0 victory over Japan.

African teams had held high hopes ahead of the first tournament to be held on the continent, but Cameroon are going home early after a second successive defeat and the hosts are also on the verge of exiting following Wednesday's 3-0 loss to Uruguay.

Cameroon took the lead through star striker Samuel Eto'o, but Denmark rallied thanks to an inspirational performance from winger Dennis Rommedahl, who made one goal and scored the winner.

The Dutch are top of Group E after two victories thanks to Wesley Sneijder's second-half winner in Durban, while Denmark and Japan will determine the second team to reach the knockout stages when they clash on Thursday, both having three points.

Japan have a slightly better goal difference and can qualify with a draw.

Cameroon star Eto'o has been one of the poster faces of the tournament, and he became the fourth player from his country to score at more than one World Cup after being restored to his more customary central striking role by coach Paul Le Guen.

The Inter Milan forward punished the Danish defense after Christian Poulsen inexplicably gave the ball away to Pierre Webo in the 10th minute in Pretoria.

The lead lasted just 23 minutes as Rommedahl broke free down the right and delivered a superb low cross into the path of striker Nicklas Bendtner, who slid the ball into the net.

That triggered a frantic end to the half as Jon Dahl Tomasson had a goalbound shot blocked by Cameroon midfielder Alex Song, who had given the ball away in the first place, then Eto'o hit the post after a similar chain of events at the other end and Achille Emana ineffectually flicked the ball at Danish goalkeeper Thomas Sorensen when he should have scored.

In the second half, Webo missed a chance to go ahead and Cameroon immediately went behind as Bendtner set up Rommedahl on the counter-attack.

The veteran winger cut inside a retreating Jean Makoun and curled in a left-foot effort, with Cameroon full-back Benoit Assou-Akotto caught out of position in the other half.

Denmark should have added to that 61st-minute goal but captain Tomasson shot straight at goalkeeper Hamidou Souleymanou after clever play by Rommedahl on 70.

Cameroon kept pouring forward in a brave attempt to stay in the tournament, and Poulsen inadvertently made a crucial block with his face from a goalbound shot by 18-year-old substitute Vincent Aboubakar while Sorensen did well to deny Emana again.

"We missed the required coolness in front of goal," Le Guen told reporters. "We didn't finish very well, but I feel like we gave everything we could."

Denmark coach Morten Olsen was not impressed by his team's performance.

"We made far too many elementary mistakes and I can't allow that from my players. We must correct that," he said. "I wasn't happy, but they fought heroically. Some didn't play well, but they fought."

Midfielder Sneijder scored the only goal at the Moses Mabhida Stadium in the 53rd minute with a vicious, swerving shot that deceived Japan goalkeeper Eiji Kawashima, who could only palm the much-criticized Jabulani ball into his own net.

The Dutch, two-times losing finalists in soccer's showpiece event, should have made it 2-0 late on in the game when substitute Ibrahim Afellay -- who replaced Inter Milan star Sneijder -- was denied by Kawashima after latching onto a through ball from Eljero Elia.

Japan, who created a number of half-chances throughout the match, had a good opportunity to equalize in the dying seconds of the game, but substitute Shinji Okazaki shot narrowly over the bar.

The Netherlands, again missing injured star forward Arjen Robben, struggled to break down a tenacious Japan side much as they did in the first half against Denmark before going on to win that match 2-0 thanks to a fortunate own-goal.

Dirk Kuyt was closest to scoring when his spectacular overhead effort was blocked, while Japan's best chance -- despite several impressive attacking moves -- was a 38th-minute volley from Daisuke Matsui that was comfortably saved by Dutch keeper Maarten Stekelenburg.

Japan's play assumed more urgency following Sneijder's thunderbolt, but they could not turn industrious forward play into any clear-cut chances to worry the Dutch defense.