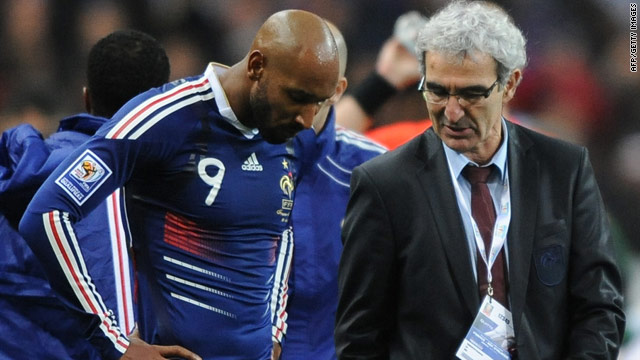 The French Football Federation released a statement on Saturday confirming that the 31-year-old had abused Domenech after being substituted during Friday's 2-0 defeat by Mexico, which left his team on the verge of elimination.

"Words spoken by Nicolas Anelka to the national coach, Raymond Domenech, are completely unacceptable to the FFF, French football and the values they defend," it said on its website.

"After being informed on Friday evening of the serious incident during halftime of the France-Mexico match, federation president Jean-Pierre Escalettes asked Nicolas Anelka in the presence of captain Patrice Evra to present an official apology to the French public and to express regret for his remarks to Raymond Domenech, the staff and 23 players from the France team.

"Upon refusal by the player to deliver a public apology, he [Escalettes] made the decision -- in full agreement with the coach and members of the official delegation in Knysna -- to exclude Nicolas Anelka from the group.

"He will leave the Team France camp this evening."

The French, who won the World Cup in 1998 and lost in the final four years ago, have been disappointing in what is Domenech's last tournament before standing down, with former Bordeaux coach Laurent Blanc to replace him.

An opening 0-0 draw with Uruguay followed by Friday's defeat has left "Les Bleus" needing to beat hosts South Africa on Tuesday and hope that Mexico and the South Americans do not draw, in order for Domenech's team to progress to the second round.

French media have speculated about dissension among the squad, with former star striker Thierry Henry reduced to a minor role as substitute and William Gallas reportedly unhappy about missing out on the captaincy, which was given to fellow defender Patrice Evra.

Anelka, who plays for English champions Chelsea, has a history of controversy on the international stage, having declared in 2002 that he would no longer be available for selection after being dropped by coach Jacques Santini when he refused a call-up.

He finally apologized to Santini in 2004, but missed out on the World Cup in Germany two years later.

Domenech brought him back into the France fold in 2007 and Anelka played at Euro 2008, where France crashed out in the first round.

He scored in the first leg of the World Cup qualifying playoff against the Republic of Ireland last November, and had been given the main striker's role in South Africa by Domenech but failed to impress in both matches.

The English players were booed as they left the pitch, having drawn for the second successive match, and Manchester United forward Rooney accused the supporters of being disloyal as he passed television cameras.

"Last night, on reflection I said things in the heat of the moment that came out of frustration of both our performance and the result," Rooney said in a statement issued by the English Football Association.

"For my part I apologize for any offense caused by my actions at the end of the game."