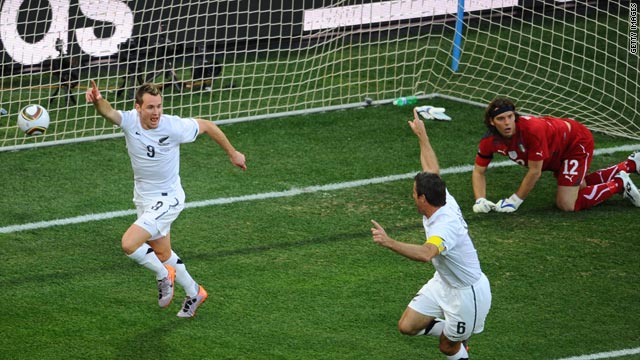 (CNN) -- Reigning world champions, Italy have been held to a 1-1 draw by New Zealand in their World Cup Group F match at the Mbombela Stadium in Nelspruit.

The All Whites took a shock lead after seven minutes when Shane Smeltz turned in Simon Elliot's free kick from close range.

Replays showed that Smeltz was offside when Kiwi defender Winston Reid flicked the ball on to him, but the lineman's flag stayed down.

Italy continued to press in the second half but found no route through a spirited and steadfast defense expertly organized by Kiwi captain Ryan Nelsen.

Despite throwing on all his three substitutes by the 61st minute, Italian coach, Marcello Lippi and his players found their attacking edge continually blunted.

Even their long range efforts were dealt with.

In the 70th minute, Riccardo Montolivo's 25-yard drive fizzed towards goal only for keeper Paston to produce the save of the match and push the ball to safety.

The stalemate continued, but New Zealand's Chris Wood could have won it for the All Whites in the 83rd minute when he shot narrowly wide of Federico Marchetti's left post.

The result leaves Italy progression to the knockout stage in doubt. A win against Slovakia would ensure qualification, but they must rely on New Zealand getting a result against Paraguay to have any chance of topping their group.

"The result is 1-1 so we just have to pull up our socks and win our next game because we don't want to go home early," Lippi said, AFP reported.

"We are in a difficult situation but we are not in a panic situation. We will have to win the next match."

For New Zealand, a team ranked 73 places below Italy in FIFA's official world rankings, the result is one to savor.

"It's an incredible result and it's way above anything we have achieved before against the stature of our competitors," New Zealand's coach Ricki Herbert said, AFP reported.

"Anything is possible and we're doing okay for a team who some say shouldn't be playing at this World Cup," he added.

In the other match in Group F, Paraguay beat Slovakia 2-0 at the Free State Stadium in Bloemfontein.

Cristian Riveros' 86th minute strike sealed a comfortable victory for the South American team after midfielder Enrique Vera had given them the lead in the first half.

The result leaves Slovakia needing to beat Italy in their final group match this Thursday to have any chance of progressing to the next round.

Paraguay, meanwhile, are almost certain to qualify and need just a point against New Zealand to reach the last 16.

Paraguay's win was never really in doubt as they pressed forward from the opening whistle, while Slovakia was content to sit back and defend.

Paraguay took a deserved lead in the 26th minute.

Lucas Barrios picked up the ball outside the Slovakia penalty area before slipping the ball through to Enrique Vera who, with Zendo Strba and Jan Durica bearing down on him, clipped the ball with the outside of his boot past Slovak keeper Jan Mucha.

The goal stirred a defensive-minded Slovakia into life forcing them onto the front foot, but their new found urgency failed to create any chances of merit as a succession of promising moves came to nothing.

Roque Santa Cruz should have doubled Paraguay's in the 38th minute, when he latched onto a loose ball on the edge of Slovakia's penalty area. The Manchester City striker fired low, but straight at Mucha, who comfortably saved with his feet.

Santa Cruz turned provider in the second half, breaking down the left past Slovakia's Vladimir Weiss in the 72nd minute.

His cross found an unmarked Vera in the penalty area but he directed his header inches wide of Mucha's right post.

But the win was confirmed when Paulo Da Silva was given an age to tee up Riveros on the edge of the box who wasted no time in smashing the ball past Mucha.

Weiss went close for Slovakia in injury time, but he and his team toiled fruitlessly in search of a goal for most of the game while Paraguay, who with Santa Cruz, Nelson Haedo Valdez and Barrios had class to spare in midfield.