London, England (CNN) -- You could argue that the real spirit of the World Cup is distilled in those fleeting, beautiful moments when the artists and millionaires are humbled by the amateurs and the underdogs.

If that's the case, then South Africa 2010 is shaping up as a vintage tournament in the competition's history with European giants including France, Italy, Spain and England all on the wrong end of shock results against supposedly lesser opposition.

Hosts South Africa beat France 2-1 on Tuesday to confirm the former world champions' first round elimination from the tournament. England face a must-win clash with Slovenia on Wednesday after being held goalless by Algeria, while European champions Spain began their campaign with a 1-0 defeat by Switzerland.

But perhaps nothing captures the transient triumph of the underdog better than the final few moments of New Zealand's surprise 1-1 draw against the holders Italy on Sunday, when a team of little-known players held on for dear life to deny their highly-rated opponents.

Before the 2010 tournament started, the "All Whites" -- along with North Korea -- were the rankest of rank outsiders with odds of 2000-1 to win the World Cup.

After all, they hail from a country without a professional league and who only qualified after beating fellow soccer lightweights Bahrain, Fiji, Vanuatu and New Caledonia to reach South Africa.

But as coach Ricki Herbert tried to hold on for a historic draw, he brought on Andrew Barron, an amateur footballer who works in an investment bank and who was only there because his boss had given him the time off work.

Barron and his All Whites held on for arguably one of the greatest shocks in World Cup history. In tribute, CNN celebrates 10 more results that shook the world.

The mysterious national team of a secretive, Stalinist nation led by a bellicose president went to the World Cup under a cloud of heightening political tensions.

Sound familiar? Just like in 2010, the North Korean national team arrived in England in 1966 as virtual unknowns. The press dubbed them "the Mystery Men."

They were lucky to even be there. Recently-released British Foreign Office documents show that the UK government almost refused visas for the team to play in the tournament because it didn't recognize North Korea. It relented and, unbelievably, North Korea beat Italy 1-0 to become the first Asian side to ever reach the quarterfinals.

"I learned that football is not only about the winning," said goal-scorer Pak Doo-Ik in "The Game of Their Lives," a documentary about the exploits of the 1966 North Korean team. "Wherever we go, playing football can improve diplomatic relations and promote peace."

North Korea went out in a blaze of glory, losing 5-3 to Portugal despite taking a 3-0 lead. The Italians, on the other hand, were pelted with rotten fruit when they returned home.

The only person who met me at the airport was my wife
--Walter Bahr, part of Team USA at the 1950 World Cup
RELATED TOPICS

The English were so sure of their superiority over the U.S., a team made up of mailmen and school teachers, that sports editors back home thought someone had made a typing error when the score first came in over the wires. Surely they meant 10-0 to England? But no, the Americans had produced one of the greatest shocks the tournament has ever seen.

The only goal was scored by Joe Gaetjens, a Haitian who a few years later went missing, presumed murdered by a death squad during Francois "Papa Doc" Duvalier's brutal rule. The humiliation sent shockwaves through the English game. But back home, the American players' exploits went almost totally unnoticed.

"The only person who met me at the airport when we flew [back] was my wife," Walter Bahr, a defender who set up the winner, told CNN. "The papers had nothing in there. The Philadelphia paper, I still have a copy of it, it has a two-inch column. I don't think I did a single interview about the World Cup until 25 years later."

It seems strange having a final as one of the greatest upsets in World Cup history, but the denouement to the 1954 tournament, held in Switzerland, was the biggest mismatch in the tournament's history.

West Germany, a team of amateur footballers still coming to terms with the political and economic aftermath of World War Two, were playing Hungary, the greatest team on the planet led by the inspirational Ferenc Puskas.

The two teams had met in the group stages, with Hungary smashing the Germans 8-3. Yet somehow West Germany managed to hang on. Such was the outpouring of previously-hidden national pride back home that German historian Joachim Fest credited the match as a vital turning point in the country's fortunes.

Soccer's influence: Why the world 'turns around a spinning ball'

"It was a kind of liberation for the Germans from all the things that weighed down upon them after the Second World War," Fest wrote. "July 4, 1954 is in certain aspects the founding day of the German Republic."

No wonder the match is known as the "Miracle of Bern." 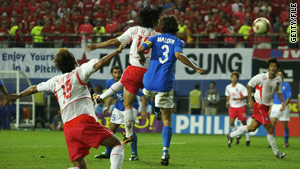 Italy lost in 2002 to a golden goal scored by South Korea's Ahn Jung-Hwan.

Not much was expected from co-hosts South Korea at the 2002 World Cup. However, they were being coached by legendary Dutchman Guus Hiddink and his players lit up the tournament on the way to the semifinals -- but it was their controversial defeat of Italy that everyone remembers.

After having a perfectly good goal disallowed, the Italians were knocked out by a golden goal scored by Ahn Jung-Hwan. As it turned out, Ahn played for Perugia in Italy's Serie A league. So incensed were the Italians with the result that the owner of his club decided to sack him.

"I have no intention of paying a salary to someone who has ruined Italian soccer," Perugia's owner Luciano Gaucci told the Italian press. Gaucci later apologized, but Ahn refused to play for Perugia again and was promptly sold to a J-League team in Japan.

Northern Ireland became the smallest nation to ever qualify for the World Cup finals in 1982. If that wasn't disadvantage enough, Northern Ireland's greatest ever player -- the mercurial George Best -- refused to come out of retirement to lend a hand.

So when they met the hosts Spain in Valencia during the group stage, a rout was on the cards. Yet Gerry Armstrong's solitary strike gave Northern Ireland victory despite having a man sent off, earning a place in the quarterfinals.

"At the final whistle, we didn't initially celebrate. We just looked at each other for about 10 seconds in amazement," former midfielder Tommy Cassidy told the Lancashire Telegraph. "We couldn't believe what we'd done. We had beaten Spain in their backyard. It was unthinkable."

It was no surprise, then, that the French were confident going into the 2002 World Cup. Too confident in fact. In the first game they faced lowly Senegal -- a former French colony and the birth place of "Les Bleus" legend Patrick Vieira -- who managed to sneak a 1-0 victory. The holders went home after the group stage having failed to score a goal.

"The opening game against Senegal was a disaster," Vieira later told FIFA's website. "That just goes to show you that quality alone is not enough. You have to work and keep your feet on the ground." 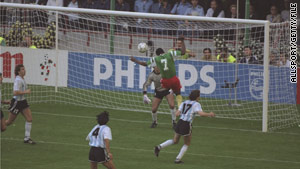 Of course, France weren't the only holders to lose to seemingly inferior African opponents in their opening match. Back in 1990, Argentina -- with Diego Maradona running the midfield -- took on a Cameroon side featuring a mixture of brute force and exquisite skill.

The Miami Herald described Cameroon as "a humble team with an insignificant past," yet it wasn't long before the "Indomitable Lions" were writing a new chapter in their history.

The 1-0 victory was memorable enough, although not as memorable as the Africans' two red cards including a ludicrous tackle on Argentine striker Claudio Caniggia by Benjamin Massing. It was so hard, Massing lost a boot.

"I got a kick from a guy against Cameroon that nearly took my head off," recalled Maradona recently. Unsurprisingly, it is the hosts, rather than the holders, that now play the first match of the tournament.

Team USA haven't ever been considered one of the leading lights in world football, but the 1998 World Cup in France represented a chance for the Americans to push on from the gains they made when they hosted the tournament four years previously.

Instead they were embroiled in a geo-political grudge match against Iran. Even U.S. President Bill Clinton recorded a message before the match preaching reconciliation.

When worlds collide: Soccer vs. politics

But it wasn't a good night for the U.S. as Iran won 2-1 to send a million people into a frenzy on the streets of Tehran, the biggest crowd in the capital since the funeral of the Ayatollah Ruhollah Khomeini.

"All we cared about, our only goal was to win against the U.S.," recalled Ali Daei, Iran's then captain. "But we didn't take it seriously for the last match against Germany so that we could qualify for the second round." 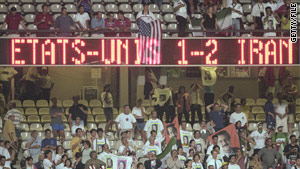 The United States and Iran met at the 2002 World Cup against a background of strained relations.

It was always going to end in tears. The Scottish had been convinced by their coach Ally MacLeod that they would come home with the 1978 World Cup. They had some great players then too: Archie Gemmill, Kenny Dalglish, Graeme Souness et al. In fact, such was the confidence they had a leaving parade to send off their soon-to-be-victorious boys.

A brief history of the World Cup

First up on the inevitable march to glory were South American minnows Peru, a seemingly simple fixture. But despite the Scots going ahead, Peru hit back with three stunning goals.

To make matters worse, Willie Johnston failed a drugs test afterwards and was sent home in disgrace, ending his international career. No-one has talked up Scotland's chances at a World Cup since.

Brazil were so sure they would win the 1950 World Cup on home soil that some early editions of the South Americans' domestic newspapers hit the streets declaring victory after halftime.

After all, the "Samba Kings" were leading 1-0 against Uruguay in a round-robin match that would determine the title -- there was no one-off final that year, a thusfar unique occurrence.

But a second-half comeback saw Uruguay win 2-1 in front of close to 200,000 fans. It caused some problems: gold victory medals had already been pressed for the Brazilians and a victory song composed, both of which had to be scrapped.

"Our catastrophe, our Hiroshima," wrote novelist Nelson Rodrigues, "was the defeat by Uruguay in 1950."

Brazilian football remained in a funk until the emergence of Pele during the 1958 World Cup in Sweden. They haven't looked back since.