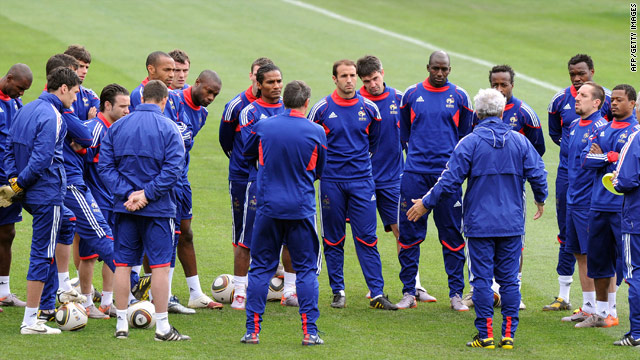 (CNN) -- France coach Raymond Domenech has described the strike by his players over forward Nicolas Anelka's expulsion from the squad as "unspeakably stupid."

Domenech said he fully supported the French Federation's decision to send the Chelsea striker home following an angry bust-up with the coach at half-time during France's 2-0 defeat to Mexico.

"Nobody can behave in such a way in the dressing room or elsewhere and high-level sportsmen and women have to lead by example through football," Domenech told reporters in Bloemfontein ahead of Tuesday's clash with South Africa.

"We tried to convince the players that what was happening was irregular, that their actions were unspeakably stupid. I told myself this mascarade had to be stopped. No way would I back this action."

The French squad resumed training on Monday a day after the players refused to train in support of Anelka.

Domenech, who is stepping down as national coach after the World Cup, described their actions as "an aberration and an imbecility".

French sports minister Roselyne Bachelot was due to hold talks with Domenech and his players on Monday and said the nation felt "great indignation" over the collapse of the team's World Cup challenge into infighting and allegations of treachery, according to Agence France-Presse.

Video: French team denounced as 'divas'
Nobody can behave in such a way in the dressing room or elsewhere
--Raymond Domenech

The former world champions face a humiliating early exit from the tournament if they fail to beat hosts South Africa, or if Group A rivals Mexico and Uruguay draw in the day's other game.

Anelka flew home to London on Sunday after being dropped from the squad following his angry confrontation with Domenech.

But French captain Patrice Evra was reported to be incensed that details of the incident were leaked to the media, claiming there was a "traitor" in the French camp.

A public training session on Sunday was halted after Evra was involved in a shouting match with fitness coach Robert Duverne, who reacted by angrily throwing down his official accreditation badge.

Domenech refused to confirm whether Evra would retain the captaincy armband against the host nation.

"All I expect of the players and what the French people are expecting of them is not excuses and more words but behaviour and results on the pitch," he added.

"My responsibility is to prepare them for tomorrow's game and that's all that counts.

"They will have to play their hearts out tomorrow on the pitch and we can still dream at this stage."

The squad, who said they only turned out to greet fans, promptly walked off and were joined by Domenech on the bus, who then emerged to read a statement on behalf of the players to declare their unanimous opposition to the decision of the French Football Federation to send Anelka home.

"They made a decision without consulting all the players, only on the basis of the 'facts' reported by the press. Accordingly, and to mark their opposition to the highest level of French football, all players decided not to participate in the work-out."

But the players said they would "do everything individually and in a collective spirit so that France regains its honor against South Africa on Tuesday."

To add to the confusion, French team director Jean-Louis Valentin publicly announced his resignation to the media.

"Patrice Evra definitively showed that he confused the role of captain with being a leader of a gang. He has neither the capacity, nor the charisma nor the qualities to don the captain's armband," the newspaper said.