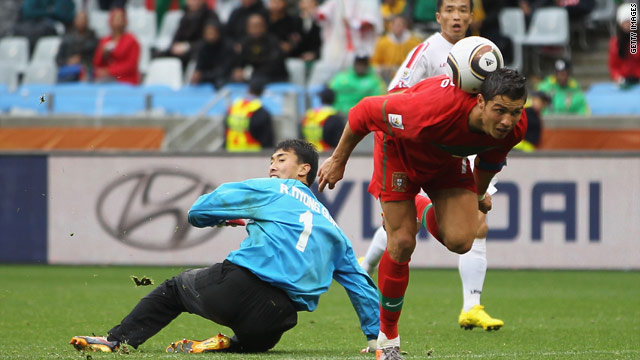 Cristiano Ronaldo juggled the ball on his back before scoring Portugal's sixth goal against North Korea.
STORY HIGHLIGHTS

(CNN) -- Portugal took a big step to escaping the World Cup's so-called "group of death" by crushing North Korea 7-0 in a rematch of the two nations' famous 1966 clash in South Africa on Monday.

Forty-four years ago, the communist country's team shocked the soccer world by taking a 3-0 lead after only 24 minutes of their quarterfinal in England, but the Europeans hit back to win 5-3 with four goals from star forward Eusebio.

There was to be no repeat in rain-drenched Cape Town, as Portugal found form after the disappointing opening draw with the Ivory Coast and claimed second place in Group G ahead of Friday's final round of matches.

Carlos Queiroz's team led just 1-0 at halftime thanks to a 29th-minute strike from Raul Meireles as the North Koreans again showed the fighting spirit that tested Brazil in their opening 2-1 defeat.

But the floodgates opened in the second spell as Simao Sabrosa, Hugo Almeida and Tiago scored in the space of eight minutes, then substitute Liedson netted to clinch the biggest winning margin of the tournament so far.

Captain Cristiano Ronaldo and then Tiago again compounded the Koreans' misery, giving the Portuguese a massive goal-difference advantage over the Ivorians ahead of their eagerly-anticipated showdown with leaders Brazil.

The Brazilians have already qualified for the second round, with six points from two victories, while the Portuguese have four points and the Ivory Coast one.

"We got seven goals but only three points. We need to be more ambitious and determined for the next phase," Queiroz told AFP.

"We were very determined to win this game but the game we played today will not help us overcome Brazil. We don't want Brazil to score any goals because this will put our reputation, our prestige, into question."

Portugal went close to opening the scoring in the seventh minute when defender Ricardo Carvalho hit the post with a powerful header from a corner.

Meireles, who scored the winner in the second leg of Portugal's qualifying playoff against Bosnia, broke the deadlock when he ran onto a fine threaded pass from midfielder Tiago and slotted coolly past Ri Myong-Guk.

Eight minutes after halftime, winger Simao fired a shot through the goalkeeper's legs after being set up by Meireles and Almeida.

Striker Almeida, recalled after missing the first match, then headed in Fabio Coentrao's left-wing cross on 56 minutes before Ronaldo laid on the third goal for Tiago on the hour mark.

Ronaldo, the world's most expensive player, hit the crossbar in the 71st minute as he was denied his first goal of the tournament -- a similarly spectacular effort against the Ivory Coast also smashed into the woodwork.

Liedson made it 5-0 after the besieged Korean defense failed to cut a cross by fellow substitute Duda 10 minutes later.

Ronaldo finally found the net with two minutes to play, showing his trademark cheeky skill as he pushed the ball past the keeper and then juggled the rebound on his back before slotting into the empty goal.

Tiago added his second just a minute later with a powerful header from a cross by another replacement, Miguel Veloso.