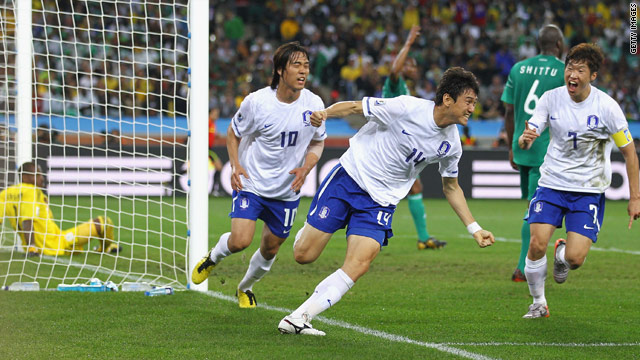 (CNN) -- Argentina booked their place in the second round of the World Cup after a 2-0 win over Greece and were joined by South Korea, who secured their berth with a thrilling 2-2 draw against Nigeria.

Nigeria and South Korea battled it out for second spot in the group in a game that swung one way and then the other in Durban.

Nigeria took an early lead through Kalu Uche but Lee Jung-Soo equalized. Park Chu-Young then put South Korea ahead before Yakubu leveled from the penalty spot.

Nigeria poured forward in search of the goal that would have put them through at the expense of their opponents but they couldn't find a winner. South Korea will now play Uruguay in the second round.

Greece adopted their familiar defensive approach but they struggled to contain a potent Argentina side in the opening half.

Maradona's side came close to opening the scoring when Sergio Aguero powered into the area, but the Atletico Madrid striker's effort was parried by Greece 'keeper Alexandros Tzorvas.

Tzorvas was grateful to defender Vasilis Torosidis in the 32nd minute as he blocked a goal bound Aguero shot after the 'keeper had spilled Diego Milito's cross.

The goalkeeper was busy again soon after with a double save -- first from Maxi Rodriguez's shot, then from Lionel Messi's curling effort.

Greece's first chance of the game came just after the break when Georgios Samaras worked his way into the area before firing wide of the target.

But despite needing more than a point to go through due to the score in the Nigeria versus South Korea game, Greece continued to sit back.

They paid the price in the 77th minute when defender Martín Demichelis smashed home a loose ball in the penalty area.

Messi nearly made it two in the closing stages as he jinked into the area before rifling a shot against the post.

Veteran striker Martin Palermo, on as a substitute, then made the game safe when he slotted home a rebound after Messi's shot had been saved.

Nigeria and South Korea met in Durban knowing that a win for either side would more than likely secure their passage into the next round.

In the 17th minute Nigeria took the lead as Chidi Odiah's right wing cross was turned home by Kalu Uche.

Midfielder Chinedu Ogbuke very nearly doubled Nigeria's advantage with a powerful shot from distance but the ball flew the wrong side of the upright.

Kalu Uche went close soon after when his thunderous 30-yard drive cannoned back off the post with the 'keeper beaten.

But in the 38th minute South Korea equalized when Lee Jung-Soo met Ki Sung-Yuen's free-kick at the back post, to volley into the net.

The whole complexion of the group changed in the 49th minute when Park Chu-Young's curling free-kick wrong footed 'keeper Vincent Enyeama and nestled just inside the post.

Yakubu then spurned a glorious chance to draw Nigeria level, missing the target from just six yards out. But moments later he redeemed himself, scoring from the penalty spot after Kim Nam-Il fouled Ogbuke.

Argentina's late strikes meant Nigeria just needed a goal to qualify at South Korea's expense and they went in desperate search of it.

Substitute Obafemi Martins nearly grabbed it when he went clean through but his chip past the 'keeper dropped agonizingly wide of the post.