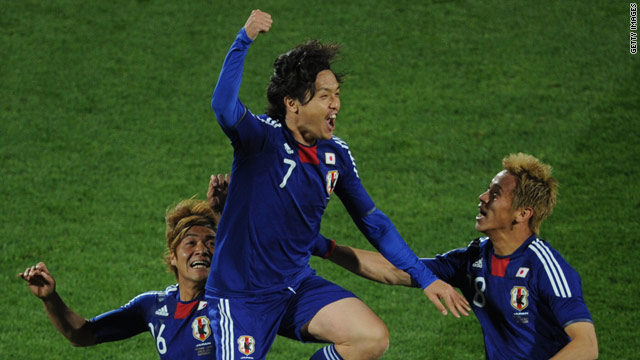 (CNN) -- Japan have comfortably beaten Denmark 3-1 at the Royal Bafokeng Stadium in Rustenburg to book their place in the last 16 of the World Cup.

First half goals from Keisuke Honda and Yasuhito Endo gave the Danes a mountain to climb.

They never looked like they would recover and a miserable night was completed when Shinji Okazaki added a third in the 87th minute, shortly after a Jon Dahl Tomasson 81st minute goal had given Denmark a glimmer of hope.

The Danes were comprehensively outplayed by Japan who produced their most resolute and skilful display of the tournament so far.

As runners up in Group E Japan will now face Paraguay in Pretoria on Tuesday for a place in quarter-finals.

The three-time Asian Cup champions join Netherlands, who confirmed first place in the group by beating an already-eliminated Cameroon 2-1 in Cape Town.

A first half strike from Robin van Persie and a second by Klaas-Jan Huntelaar seven minutes from time ensured Netherlands finished with a 100 percent record at the top of Group E setting up a second round clash with Italy's vanquishers Slovakia in Durban on Monday.

The win over Cameroon team in Cape Town completed a comfortable group stage for the Dutch, despite not playing their best football.

They will be boosted though by the return of Arjen Robben who came on as a second half substitute.

Denmark, who needed to win the match to have any chance of progressing to the knockout stages, started their match with Japan brightly. Skipper Jon Dahl Tomasson saw a chance go narrowly wide in the opening minutes.

But two Japanese strikes within 13 minutes of each other stunned the Danes.

Honda gave Japan the lead in the 17th minute with fine free kick which flew past keeper Thomas Sorensen who appeared to be deceived by the flight of the ball.

Yasuhito Endo doubled Japan's lead in the 30th minute when he curled a beautifully executed free kick around the Danish wall and past the despairing dive of Sorenson.

If the Danish keeper was possibly at fault for the first goal, there was nothing he could do with Endo's strike which found the bottom left corner of the net.

The second half didn't get any better for the Danish keeper when he fumbled an innocuous looking free kick from Yasuhito Endo. His blushes were saved when the ball cannoned to safety off his right hand post.

Jon Dahl Tomasson scored for Denmark in the 81st minute, turning in the rebound from his own penalty kick which had been awarded for a push on Daniel Agger. But it was too little too late for the 1992 European Champions.

Moments later, Okazaki scored a third for Japan after Keisuke Honda unselfishly laid the ball on for him.

It sealed a memorable win and qualification for the last 16 on foreign soil for the first time in their history.

But man-of-the-match Honda believes Japan could go even further in the tournament.

"I expected to be really jubilant but I'm not as jubilant as I thought I would be because I don't think we are finished here. I believe we can go further in this competition," the CSKA Moscow star said, AFP reported.

Robin Van Persie opened the scoring for Netherlands in the 36th minute.

Playing a neat one-two with Rafael van der Vaart on the edge of Cameroon's penalty area, the Arsenal striker then fired a low shot under keeper Souleymanou to register his first goal of the tournament.

Inter Milan's Samuel Eto'o leveled the scores in the 65th minute after Cameroon were awarded a penalty by the Chilean referee, Pablo Pozo when Rafael van der Vaart raised an arm to block Geremi's free-kick in the box.

Eto'o stepped up to score his second goal of the tournament.

The introduction of Arjen Robben -- his first appearance at the 2010 World Cup -- immediately created panic in the Cameroon defense. Cutting in from the right, Robben fired a shot from 20 yards which rebounded off the post.

The ball fell kindly to Klaas-Jan Huntelaar who coolly slotted home the ball into an empty net and secure victory for Netherlands.