Brazil cruise into quarterfinal meeting with the Netherlands 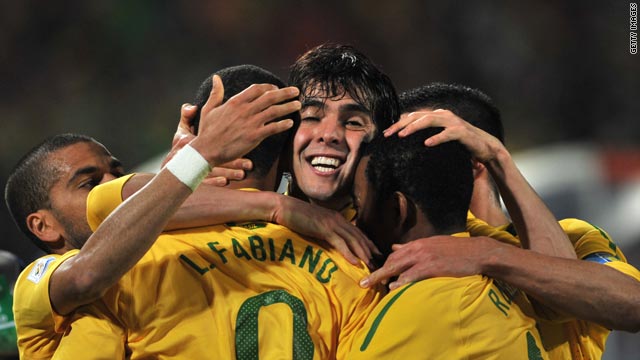 (CNN) -- Brazil turned on the style to defeat their South American rivals Chile 3-0 on Monday and set up a World Cup quarterfinal against the Netherlands.

The five-time world champions, who showed little of their usual dazzling play during the group phase, sent an ominous warning to their rivals as they comprehensively outplayed Chile in Johannesburg, with Juan, Luis Fabiano and Robinho all on target.

"We have to improve in all sectors of our play, but it was a nice game against Chile," Brazil coach Dunga told AFP.

"We have already said we are trying to play the open football which everyone wants to see. The players did well and we got forward a lot.

Brazil, who welcomed playmaker Kaka back from a one-match ban, took the lead after 34 minutes from a straightforward corner routine.

We know the Netherlands are a very difficult team to beat and they are very able technically, they play their football like South Americans
--Brazil coach Dunga

Right-back Maicon crossed for central defender Juan, who rose above the Chilean defense to power his header into the net.

Robinho carried the ball down the left flank before squaring to Kaka, who cushioned a pass into the path of Luis Fabiano, who rounded the goalkeeper and scored.

The third goal, after 60 minutes, stemmed from a swift counter-attack, with Ramires charging down the center with the ball and passing to Robinho, who curled his finish around the goalkeeper.

Chile, who reached the semifinals on home soil in 1962, struggled to break down a well-drilled Brazilian back line and were restricted to half chances for Humberto Suazo and Jorge Valdivia.

Robinho came close to adding a fourth when he was released down the right, but his low shot was tipped around the post by goalkeeper Claudio Bravo.

The victory was Brazil's eighth in a row over Chile, who became the first South American side to go out of the tournament.

Brazil will play the Netherlands in the quarterfinals in Port Elizabeth on Friday, July 2.

"We know the Netherlands are a very difficult team to beat and they are very able technically, they play their football like South Americans," said Dunga.

France, the 1998 winners and 2006 runners-up, were eliminated in the group stage after collecting just just one point and scoring one goal in a campaign marred by infighting.

"After a weekend of reflection during which I consulted my elected colleagues and those close to me, I have decided that I must resign," Escalettes said in a statement on the federation website.