Time for football to embrace technology? 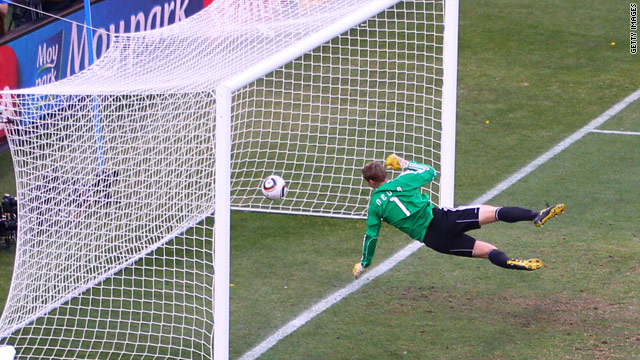 Manuel Neuer of Germany watches the ball bounce over the line from a shot from England's Frank Lampard.
STORY HIGHLIGHTS

London, England (CNN) -- Forget the troublesome flight of the Jabulani ball or the impact of playing at altitude, this World Cup looks likely to be dominated by one issue: FIFA's refusal to use video technology during matches.

On Sunday, the head of football's governing body looked on as England's Frank Lampard was inexplicably denied a clear goal against Germany by the match officials who failed to see the ball drop well behind the goal line. The Germans, leading 2-1 at the time, went on to win the match 4-1.

Later that evening Argentina took the lead against Mexico in their last 16 match with a goal that was clearly offside. The furious Mexican players surrounded the officials pointing to the stadium's giant screens which showed Carlos Tevez was yards offside when he received the ball from Lionel Messi and headed into the net.

Capello must wait on his fate

Why does FIFA refuse to allow video technology?

In March, FIFA President Sepp Blatter all but ruled out the introduction of video technology when he described football as "a dynamic game" that could not be stopped in order to review a decision.

"It would break up the rhythm of the game and possibly deny a team the opportunity to score a goal. It would also not make sense to stop play every two minutes to review a decision, as this would go against the natural dynamism of the game," he said in a statement.

Prior to the World Cup, Blatter told CNN the available technology was either too complicated to introduce, not accurate enough or too expensive. The first example he cited was the "Cairos" system pioneered by Adidas which uses a microchip inside the ball to send a signal to the referee when it crosses the goal-line. But he said the whole pitch would need to be "wired up" for the sensors to be accurate enough.

Blatter also questioned the accuracy of the "Hawk-Eye" system -- which deploys cameras in key locations around the field of play to produce a three-dimensional recreation of the action and trajectory of any ball in motion. But he said If the line of vision of the various cameras is blocked, then it doesn't work.

It seems FIFA, together with European counterpart UEFA, has chosen to keep faith in the human factor by experimenting with extra officials on the goal-line, as was seen last season in the Europa League, the continent's second major club competition after the Champions League.

Is Blatter off the mark?

The creator of Hawk-Eye, Paul Hawkins, told CNN that the suggestion his system is too expensive to introduce is a non-starter. "Tennis actually makes money out of Hawk-Eye, it doesn't cost it anything at all," he said. "All the events are sponsored, such as Rolex at Wimbledon, and they pay more to governing bodies than the governing bodies pay us for the technology. It'll be the same in the case of football."

"It would also not make sense to stop play every two minutes to review a decision, as this would go against the natural dynamism of the game.
--Sepp Blatter
RELATED TOPICS

Hawkins also refuted Blatter's claim that Hawk-Eye is inaccurate. "The problem is they (FIFA) don't understand how it works. We've been tested independently, firstly by England's Premier League and secondly by FIFA themselves, and they tested the key issue for the camera system: many players around the ball. We showed it worked in 100 percent of cases in crowded penalty boxes."

"Would anybody dispute that Wimbledon is a better tournament because of the use of Hawk-Eye? I personally would allow two touchline challenges per team per game, but even if you say that's taking it too far, you cannot argue that as matters stand the referee is not being undermined."

How do other sports use technology such as Hawk-Eye?

Tennis: Hawk-Eye was successfully introduced into professional tennis in 2006, with courts at major tournaments such as Wimbledon equipped with screens to provide instant replays of shots to settle disputed line calls. Hawk-Eye can judge the trajectory of the ball to within millimeters. Players are permitted a limited number of unsuccessful "challenges" in a set.

Cricket: Hawk-Eye is also used in cricket, following the recent introduction of the "Decision Review System" which allows player appeals against umpiring decisions. A number of specially-placed cameras are used to track the movement of the ball from the moment it leaves the bowler's hand. This information is then recreated visually by a computer to predict whether a ball that has hit the batsman on the pads would have gone on to hit the stumps -- which would constitute a "leg before wicket" decision and mean the batsman is out.

Rugby Union: Leading international and club-level rugby competitions, from the World Cup to the Heineken Cup, have long used television match officials (TMOs) to help clarify incidents during matches. For example a referee who is unable to see whether a ball was properly grounded for a score, known as a try, may consult the TMO to see if the television replays from a variety of angles prove more conclusive.

Ice Hockey: Video technology has been used by the elite National Hockey League (NHL), which includes the top professional U.S. and Canadian teams, since the early 1990s to show whether the puck has crossed the goal-line. A "video judge" has the authority to review incidents during matches and then overrule the match referee if there is clear video evidence that a goal was scored or awarded incorrectly.