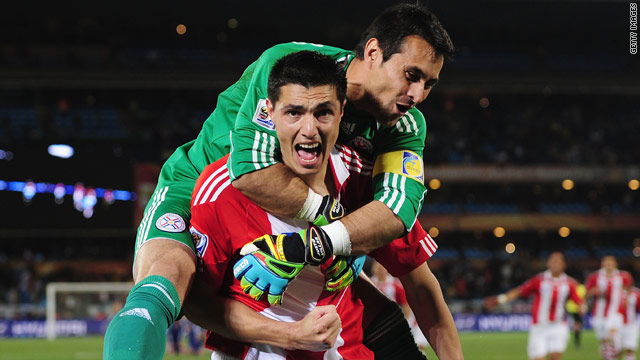 (CNN) -- Paraguay booked a place in the last eight of the World Cup for the very first time in their history at the expense of Japan but only after a dramatic penalty shoot out in Pretoria.

Japan's Yuichi Komano missed the crucial spot kick and Paraguay striker Oscar Cardozo was the man to seal the game with the winning penalty, as his side triumphed 5-3.

Neither side created many chances during 120 minutes of disappointing football, though Japan's Daisuke Matsui hit the crossbar and Paraguay forced goalkeeper Eiji Kawashima into a couple of smart saves.

In the end, Paraguay held its nerve from 12 yards to make it to the quarterfinals, where they will face the winners of Tuesday's other last 16 clash between Spain and Portugal.

After a quiet opening 20 minutes at Loftus Versfeld Stadium Paraguay fashioned the first opening when Lucas Barrios got into the area and forced Japan goalkeeper Eiji Kawashima into a good low save.

Seconds later, Daisuke Matsui struck the bar from 25 yards with a looping shot.

Manchester City striker Roque Santa Cruz was the next to go close as he latched onto a loose ball in the area but he dragged his shot wide.

Five minutes before halftime Japan created a chance for Keisuke Honda after Matsui squared the ball to him on the edge of the box. He elected to shoot, and sliced his shot wide, when Yoshito Okubo was unmarked to his left.

Chances were few and far between for the rest of half as Japan sat deep and made themselves difficult to break down.

After the break Nestor Ortigoza worked his way into the penalty area but failed to get a shot off before Cristian Riveros flashed a header right at Kawashima.

Japan defender Marcus Tulio Tanaka went close with a header from a corner but both sides struggled to open each other up.

As the end of 90 minutes loomed both sides retreated, more than happy to sit back rather than launch men forward, and the game duly went into extra time.

Paraguay pressed forward after the restart and substitute Edgar Barreto tested Kawashima with a header, before the 'keeper had to dive at Nelson Valdez's feet to prevent him scoring.

Honda then forced Paraguay 'keeper Justo Villar into a save with a free-kick.

In the second half of extra time Japan came close to a winner when Yuto Nagatomo's cross was met by Honda but Villar saved, but the game went to penalties.

The first six penalties were converted before Komano smashed his shot against the crossbar. Then Cardozo held his nerve to clinch the game.