Henry and Toure to leave Barcelona 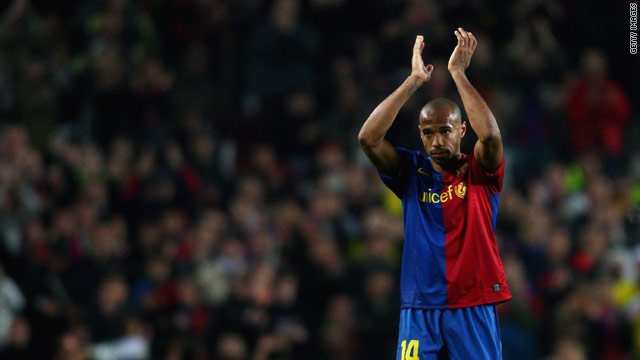 CNN -- Spanish champions Barcelona have announced that striker Thierry Henry and midfielder Yaya Toure will leave the club before the new season.

The 32-year-old recently returned from the World Cup in South Africa after France failed to win a single game and make it past the group stage of the tournament.

"Right now, he needs to take a step forward. This implies that this coming season, Barca will not have to pay his salary," Barcelona director general Joan Oliver said of Henry, who has a year left on his contract.

A World Cup winner in 1998 and a losing finalist four years ago, this year he played a minor role as a substitute as his career continued the decline that began with his departure from English club Arsenal three years ago.

While contributing to Barcelona's unprecedented treble in 2008-09, capped by a Champions League title, he struggled with injury at times and was even usurped by younger players at the Nou Camp such as winger Pedro.

Toure has also been told he can leave the club, with English side Manchester City reportedly favorites to reunite the 27-year-old with his brother and Ivory Coast international teammate Kolo.

"Barcelona director general Joan Oliver has said that the club has agreed the exits of Yaya Toure and Thierry Henry," a statement on the club's website said on Tuesday.

"But at the moment the final moves are in their hands. In case of Toure, Oliver has recognized an understanding between the club interested in the midfielder, Manchester City, and Barca, but the transfer cannot be made official yet."

Henry has been strongly linked with a move to American Major League Soccer team New York Red Bulls in the past.

He is a big basketball fan and is often seen with close friend Tony Parker of NBA side San Antonio Spurs when visiting the U.S.

In 2001, Henry flew out to Philadelphia to help cover the NBA finals for a French television channel.