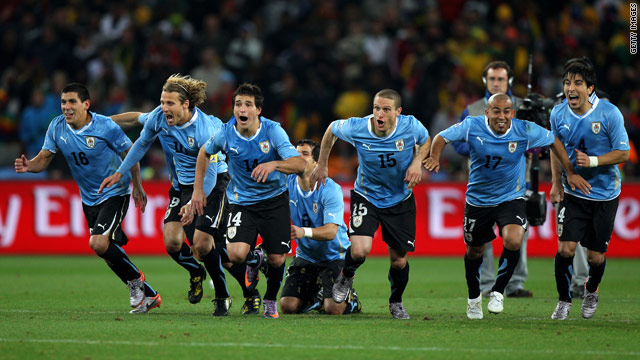 (CNN) -- Uruguay beat Ghana in a dramatic penalty shoot out to reach the semifinals of the World Cup where they will face the Netherlands.

But Ghana were left to rue a missed penalty in the last minute of extra time on Friday night which denied them the honor of becoming the first African team to reach the semifinals.

The penalty was awarded after Ghana's Dominic Adiyiah had his first shot blocked on the line by Luis Suarez and his follow up effort was kept out out by the Uruguayan striker's hand.

It meant a red card for Suarez, but Asamoah Gyan's spotkick hit the crossbar to stun Ghana and their supporters in Johannesburg's Soccer City.

In the shootout, Sebastian Abreu coolly chipped Richard Kingson in the Ghana goal for the clinching goal in the penalties to give his side an unassailable 4-2 lead.

Maxi Pereira also blazed over for Uruguay but Abreu kept his nerve to put his side through.

Video: Ghana out of World Cup
I am very emotional. We didn't play well, but we have gone through
--Oscar Tabarez
RELATED TOPICS

They will play the Netherlands in the semifinals in Cape Town next Tuesday, but Suarez will miss out after his sending off.

Ghana, the only team from Africa to reach the knockout stage, went ahead in first half stoppage time as midfielder Sulley Muntari scored with a superb long-range strike.

But Uruguay's star striker Diego Forlan equalized with a swerving free-kick which deceived Ghana keeper Kingson in the 55th minute.

Both teams had opportunities to claim victory in normal time but the match was petering out in extra time until the cruel last-gasp drama.

Uruguay coach Oscar Tabarez acknowledged his team had been fortunate to go through.

"I am very emotional. We didn't play well, but we have gone through," he told AFP.

"The players are very strong and have a strong team spirit. We have a little time to prepare for the match against Holland but we are going there to win."

It will be Uruguay's first World Cup semifinal for 40 years.