Dutch warned about complacency ahead of Uruguay semifinal 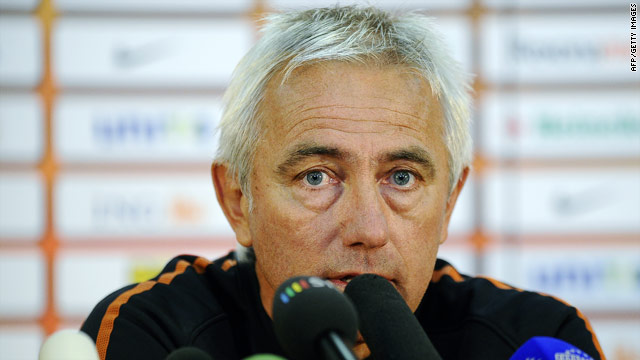 (CNN) -- Netherlands coach Bert van Marwijk has warned his players against complacency ahead of Tuesday's World Cup semifinal against Uruguay in Cape Town.

The Dutch came from behind to beat 10-man Brazil 2-1 in the quarterfinals on Friday, with midfielder Wesley Sneijder grabbing the winner with a rare headed goal.

They will now face Uruguay in the last four after the South Americans overcame Ghana in a dramatic penalty shootout.

Van Marwijk, who has lost only once since taking over as coach in 2008, has warned his side not to underestimate the two-time world champions.

Brazil crash out to Netherlands

"We've already seen a lot of Uruguay and I know some of the players," he told world governing body FIFA's website. "It will be a very dangerous match."

The euphoria at home is massive, and maybe it's good that we're so far away because we really need to focus on Uruguay
--Bert van Marwijk
RELATED TOPICS

"The euphoria at home is massive at the moment, and maybe it's good that we're so far away and can't witness it because we really need to focus on Uruguay and that won't be easy.

"They didn't reach the semifinal for nothing, so we have to really focus again and not think that we're already there."

At Euro 2008, the Dutch defeated France 3-0 before thrashing world champions Italy 4-1 to finish top of the "group of death" having won all three games.

However, this was followed by a surprise 3-1 quarterfinal defeat to Russia in Switzerland.

The Dutch, who qualified for the 2010 World Cup with a 100 percent record, have won all five matches en route to the semifinals.

But van Marwijk hopes his team can learn lessons from two years ago.

"We have witnessed it before in the past," he said. "Think about two years ago in Austria and Switzerland -- we beat Italy and France and everybody already thought we would become European champions but we didn't even survive the quarterfinals because we thought that we were already there.

"That's what I've tried to make clear, that this has to be different."

Uruguay, one of only seven nations to have won the World Cup, are seen as the underdogs out of the last four teams still in the competition after reaching the semifinals for the first time since winning the inaugural tournament at home in 1930.

When "La Celeste" triumphed for the second time in Brazil in 1950, the event did not feature semis or a final, but a four-team group consisting of the first-round pool winners played each other once to decide the title.

This year, having won Group A without losing a match, Uruguay beat South Korea 2-1 in the last 16 thanks to a double strike from forward Luis Suarez.

However, Uruguay manager Oscar Tabarez will be without the suspended Suarez so will look to the in-form Diego Forlan to spearhead the attack.

Can football stamp out the cynical cheating?

Suarez was given a one-game ban after he was sent off for a controversial handball on the goal-line against Ghana in injury-time during the quarterfinals.

The resultant spot-kick by Asamoah Gyan was saved by goalkeeper Fernando Muslera, before Uruguay went on to win the tie 4-2 in a penalty shootout.

Tabarez will also be without fullback Jorge Fucile, who is suspended, while defender Diego Godin may miss out with a thigh injury.

Uruguay captain Diego Lugano is a major doubt after suffering a knee injury early on in the victory over Ghana.

Striker Robin van Persie, who has scored only once so far in the tournament, is set to start after scans showed he did not break his elbow against Brazil.