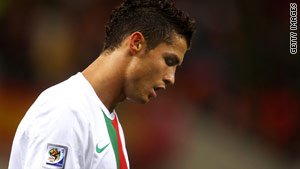 Ronaldo was bitterly disappointed after Portugal were knocked out of the World Cup by Spain.
STORY HIGHLIGHTS
RELATED TOPICS

(CNN) -- Real Madrid and Portugal footballer Cristiano Ronaldo has revealed he has become a father for the first time with a mystery woman.

The striker, who captained his country recently during a disappointing World Cup campaign in South Africa, announced the surprise news on Twitter and said he planned to raise the baby boy himself.

According to media reports, the mother is an unnamed American woman he is no longer with. Ronaldo spent much of last summer in Los Angeles ahead of his $100 million transfer from Manchester United to Real Madrid.

A statement released on the star's Facebook page Sunday said: "It is with great joy and emotion that I inform I have recently become father to a baby boy.

"As agreed with the baby's mother, who prefers to have her identity kept confidential, my son will be under my exclusive guardianship.

"No further information will be provided on this subject and I request everyone to fully respect my right to privacy (and that of the child) at least on issues as personal as these are."

According to Portuguese newspaper Correio da Manha, Ronaldo's mother and his sisters are dealing with the paperwork necessary to bring the child to the family home in Portugal.

Joao Carvalho, a journalist with Portugal's TVI network, told CNN the news of Ronaldo's baby had provoked a mixed reaction in a country where he is regarded as a superstar.

"On one hand, people are unhappy with how he has handled the situation from a PR standpoint," he said. "But on the other hand they think having a baby might be beneficial for him, as it will make him more mature and give him some personal stability."