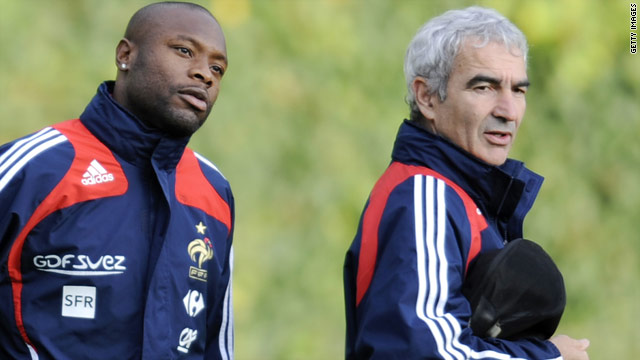 In an interview with French weekly culture magazine Les Inrockuptibles on Wednesday, Gallas became the first French player to speak about the disastrous World Cup campaign, saying that "the real problem is the coach."

"Les Bleus" crashed out of the tournament in the first round after two draws and a defeat left them at the bottom of Group A with just one point.

Forward Nicolas Anelka was sent home from the tournament after an argument with Domenech, causing the rest of the French side to strike from training.

Domenech wasn't open. Lots of players could not talk to him. At the end of the day he took decisions alone
--William Gallas
RELATED TOPICS

Domenech, as was decided before the competition began, has now been replaced by former World Cup winner Laurent Blanc.

"We all wanted to protest against the decision taken by the coach. Everyone was in agreement to boycott training," the 34-year-old Gallas said.

He also hinted that Anelka's row with Domenech may not have been a one-off, as a lot of players found it difficult to build a relationship with the coach.

"Domenech wasn't open. Lots of players could not talk to him. He said that he listened to us, but at the end of the day he took decisions alone," said Gallas, who was given extra time to recover from injury by Domenech before being named in the 23-man squad for the finals.

"What we said didn't have any influence, so I no longer said anything. I listened and I did what he told me."

Gallas is still unhappy that he was overlooked by Domenech when Patrice Evra was named captain of France.

"The hardest thing was the way that it happened. Domenech never told me," said Gallas, who was vice-captain under former skipper Thierry Henry.

"I learnt by accident before the match against Costa Rica that the captain was Evra. I saw that the armband was on his shirt."

Gallas is searching for a club now that his contract with English Premier League side Arsenal has expired.

On Wednesday, Arsenal signed French defender Laurent Koscielny from Lorient on a long-term contract for an undisclosed fee.

"He has shown he is mentally strong, he's a fighter and a very strong competitor. Koscielny is a great addition to our squad," manager Arsene Wenger said in a statement on the club's official website.

Meanwhile, 1998 World Cup winner Patrick Vieira has confirmed that he no longer wants to play for France. The midfielder will instead concentrate on his career at English club Manchester City.

"My target in the next few years is City. I want to do my best for the club," Vieira told the club's official website on Wednesday.

The 34-year-old made his first appearance for Les Bleus 13 years ago and has more than 100 caps, but was controversially left out of France's World Cup squad by Domenech.