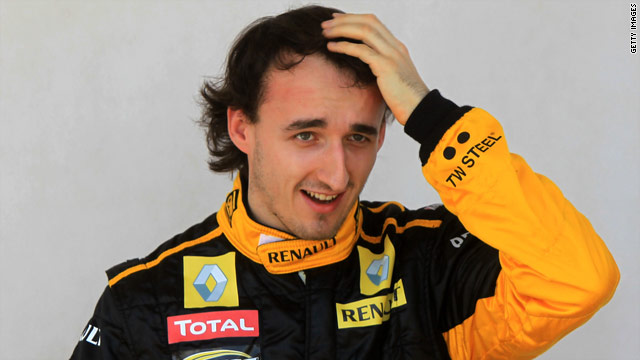 Robert Kubica has committed himself to Renault until the end of the 2012 season.
STORY HIGHLIGHTS

(CNN) -- Robert Kubica has signed a contract extension that will keep him at Renault until the end of the 2012 season.

The Polish Formula One driver is lying sixth in the drivers' championship after a string of impressive performances this season.

He finished second at the Australian Grand Prix, third in Monaco and fifth in Valencia at the European Grand Prix.

The 25-year-old's strong form meant he was linked with a move to rivals Ferrari but he has opted to prolong his stay with Renault.

He told Renault's official website: "It was a straightforward decision to continue with a team where I feel at home.

"What's important for me is to be in the right atmosphere, with a good group of people, where everybody is pulling in the same direction.

"This is what we have tried to build from the beginning of my time with Renault. I think we have already achieved a lot together, and I believe that with plenty of effort, time and the right approach, we can move even further forward.

"That is certainly our target, so we will keep working hard and pushing on every front, not just for the rest of this season but also for next year when there are more big rule changes on the way. I am really looking forward to the challenge."

Kubica has finished outside the top ten only once this season and he currently stands 44 points off championship leader Lewis Hamilton, of McLaren.

This is Kubica's first season with Renault but team principal Eric Boullier said he was delighted to secure Kubica's future.

"We are delighted that Robert will remain with us for the next two seasons and I would like to thank him for the faith he has shown in this team," said Boullier.

"There have been many rumors surrounding his future in recent weeks, which were a tribute to how well he has driven this year, and we are very happy to have agreed a multi-year deal.

"Our clear goal is to become title contenders over the next two years. To do so, we need a driver of Robert's caliber -- somebody who is fast, totally committed and doesn't make mistakes.

"His performances during the first half of the 2010 season were flawless, and we hope to achieve great things together in the future."